ANC MP Dr Makhosi Khoza engaged students about the importance of morality in public administration during a time of great political controversy. 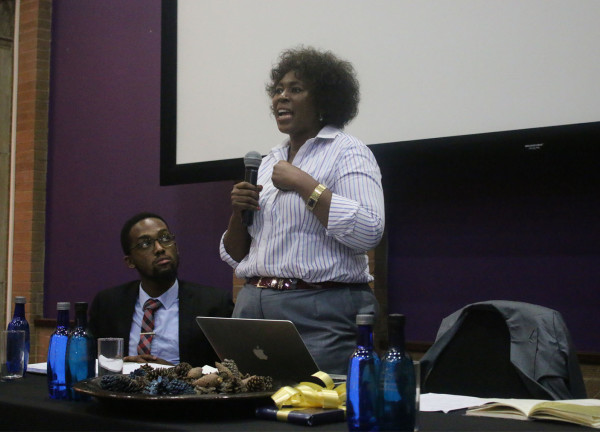 South African MP, Dr Makhosi Khoza, spoke at Wits University on Wednesday, April 12 and did not shy away from reflecting on her controversial Facebook comments about the ruling party made earlier this week. Hosted by the Development and Leadership Unit (DLU), Khoza addressed staff and students in a seminar room in the South West Engineering Building about integrity, transparency and accountability in public administration as part of the Moving the State debate series.

Khoza made headlines this week after posting a Facebook message which expressed her concerns about the current state of the ruling party and South Africa. The Facebook post, which went viral, spoke about how the ANC needs to listen to the citizens who marched against President Jacob Zuma on April 7. “The politics of patronage has finally claimed the sanity of my ANC leadership”, Khoza wrote in the post.

She explained that she made the comments out of frustration of having to follow “directionless directives”. Khoza told the audience that she was heavily criticised for the post and even received phone calls saying that should be recalled.

“Although I am in trouble for that Facebook thing, I’ll tell you why I did it and I’m not apologetic and I’m not going withdraw it,” Khoza said.

Khoza was vocal about the importance of morality in politics, particularly with regards to the ruling party, and the consequences of immorality in governance. “We have become a society where corruption has become a new value system,” said Khoza.

Thami Pooe, a third year BA student, and the dialogue’s MC believes that it is important to have platforms like this discussion to give hope to students about the government.

“It’s important that us as students and student leaders to hear from an ANC member that it’s not impossible to govern with integrity in this country,” said Pooe.

Omphemetse Masilo, the co-ordinator from DLU said the Moving the State debate is one of a series of dialogues which aims to keep the Wits community up to date with the present and latest trending stories around the country and globe with ranging topics. “We want to create a platform were students can engage in critical conversations,” said Masilo.