University management heeded alleged noise complaints from students in residence and those who use the library from Wednesday’s through to the weekend. 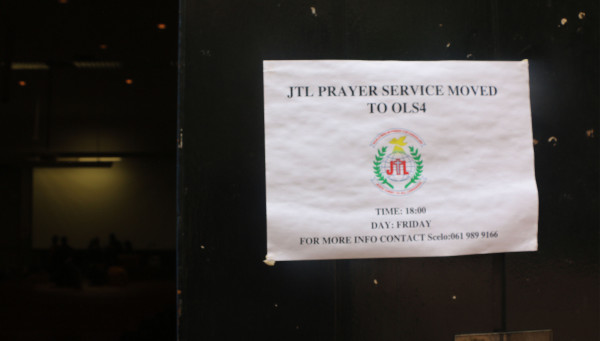 The Wits religious cluster which comprises of the Christian societies on campus, received email communique at the end of block 1 from the office of the student governance instructing them to vacate respective buildings they hold services in due to noise complaints from residence students and students who use libraries on the east and west campus. Onkgopotse Qhawe Kotsokoane a member of the church leadership at Every Nation Wits formerly known as His People, and also the representative of the religious cluster said the email notice was sent to a number of churches by the student governance office 2 days before services were scheduled indicating that they are banned from worshiping current venues with immediate effect. Some of these churches included the Christian Association Fellowship (CAF) ,JTL and Arena of Liberty.

Kotsokoane said new sets of rules were imposed on March 17 on societies who use venues regularly on the Wits Campuses. Part of the changes includes booking venues on a monthly basis rather than yearly and also the usage of musical instruments have been banned in certain buildings. PIMD says external demand for venues resulted in the office implementing the monthly booking system. The cluster representative said many of the affected churches were not okay with the approach used by Property and Infrastructure Management Division (PIMD) (in charge of venue allocations) and the office of Student Governance (responsible for sending communique to students). Kotsokoane says upon their request for evidence of complaints lodged, none were brought forward and the decision had been made. The alternative venues churches have been given are inclusive of tutorial rooms whose capacity is a fraction of what the usual venues the churches have previoiusly occupied, said Kotsokoane. The churches highlighted the financial implication of having to advertise the new venues on posters weekly based on the available venues.

Kotsokoane says an attempt to resolve the problem has been futile. He further says that meetings with PIMD and the Student Governance office have not happened as they have been repeatedly postponed and some instances no one pitched for the meetings. The issue remains unresolved however the church community is growing tired and regarded the incident as “a direct attack on the religious cluster of societies, and say it is unacceptable in terms of the right to religious freedom”, said Kotsokoane.

SRC Clubs, Societies and Organizations Officer (CSO) Nontobeko Nkosi says churches that are based at, Wits Science Stadium ,FNB ,Umthombo and MPT have been affected. No complaints from resident’s students and students who use the library were sent to her as the CSO. Nkosi says she sent out an email to query the communique sent to the religious cluster and but is yet to receive a response from PIMD.

On Wednesday April 12 the affected religious societies met with PIMD, the SRC CSO officer and religious cluster representative. Riaz Adam the PIMD Deputy Director of  Venue & Space Management raised issues that informed the decision to prohibit churches from occupying the venues. Some of these Adams recalled as including, equipment and furniture being damaged and “no one taking responsibility for it”. Adam also questioned the optimum use of the buildings by the churches and indicated that some venues that have equipment that the churches don’t utilize and as such alternative venues would come with less equipment but be accommodating to the space use for the churches. Adams also referred to how venues being limited to churches and the Wits community do not bring in money and restricts allocation of the venues to external organizations that want to pay.

Churches wanting to use FNB, Wits Science Stadium & MPT would have to send a motivational letter to the Dean of student, and motivate for the use of the venue, the detail of this rule is yet to be finalized in a follow up meeting between the SRC CSO officer , the religious cluster representative and PIMD.