The Traces and Tracks exhibition documenting the San people over 30 years is now on at the Origin Centre.

The 30-year journey of photographer and archivist Paul Weinberg with the nomadic San of southern Africa has been captured in a book that was launched at the Wits Origins Centre on Wednesday, April 12.

The launch of Traces and Tracks coincided with an exhibition of 100 of Weinberg’s photographs which showcased a number of San communities and the challenges they face in a modern and ever changing world. The exhibition preserves and shares culture, heritage and skills of the San through photography.

Weinberg said his journey with the San began when he was conscripted to the army in the late 80’s where he initially interacted with members of this indigenous community.

He soon realised that the “romantic” version he had of the San that he had learned at university, was unrealistic, and so he set out to learn for himself what their lives were like. He said he came across a community under severe pressure, grappling to hold on to their land, their way of life, culture and values.

Weinberg said he had watched people lose and regain their land. He had witnessed people vote for the first time, hunt and celebrate life. His works shows another version of the San peoples’ reality defying the notion that time has stood still for them.

The exhibition took visitors on an extraordinary journey of discovery which depicts the modern-day reality of the San, which represents a range of their encyclopedic knowledge about the environment, their culture and how their ways of life are being assimilated into several ever-changing ecologies.

Weinberg said the exhibition, “Is very beneficial (to students), it deals with issues of marginalisation, hidden histories, buried narratives and post-colonialism – which is pertinent for where students find themselves now. It calls for engagement as we (the older generation) watched with great interest the student activism”.

Weinberg said he strategically chose to showcase his exhibition at the Origins Centre because it is not a fine art space. “The Centre of Humankind, helps us understand where we come from, how our first people were treated. My work is a window of my understanding of this conundrum and documenting the first people of Africa [the San],” he added.

Origins Centre CEO Steven Sack reiterated Weinberg’s sentiments on the importance of the exhibition. “The exhibition is relevant to the Wits community because it deals with big issues that cut across faculties, such as decolonized education and the land question. Many people misrepresent the culture [of the San]. Paul’s work is known and respected even in the community of researchers,” Sack said. 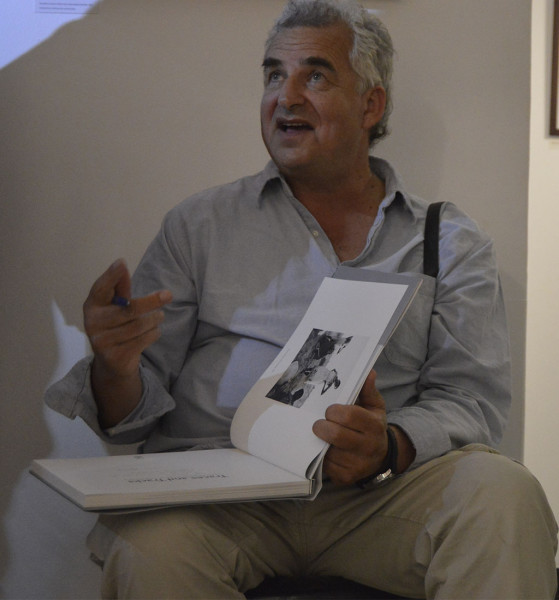 Malesedi Mothokoa who is studying towards a BSc in Archeology at the University of Pretoria said, “The exhibition is thought-provoking. The emotional black and white photography that sets the emotion, forcing me to critically think in the abundant space … critically relevant to me as an African, namely South African and our subjectively pejorative past”.

BSc (Arch) student, Nomvuyo Morgan said, “The exhibition incorporates the emotional aspects of the human condition and the space allows for group discussion.”

Weinberg said that the 30-year journey to complete his work was not an easy task. From getting stuck in the sand with limited resources and time against him. “Getting the trust of the people was important. I hung out with the people to get used to me as a fellow human first and then I gained their trust over time. To take the photographs I always asked for permission,” he said.

Weinberg’s pieces are on sale and half of the proceeds will go to the!Khwa tta Trust, a tertiary education fund for the San.