OIL AND watercolour painter Chris Soal is slowly making a name for himself in the art industry in South Africa and the rest of the world.
From watercolour painting to showcasing his work at international exhibitions, Soal is ready to take on the South-African art scene. Apart from curating and showcasing his artwork at various art galleries in South Africa, Soal’s work has been shown at art fairs in London, Amsterdam, Dortmund, Brussels and Zurich.
This fourth-year BA Fine Arts student has also won multiple awards for his work. In 2015, he received the Thami Mnyele Top 100 award and was a runner up for the Wits Young Artist award in 2016. 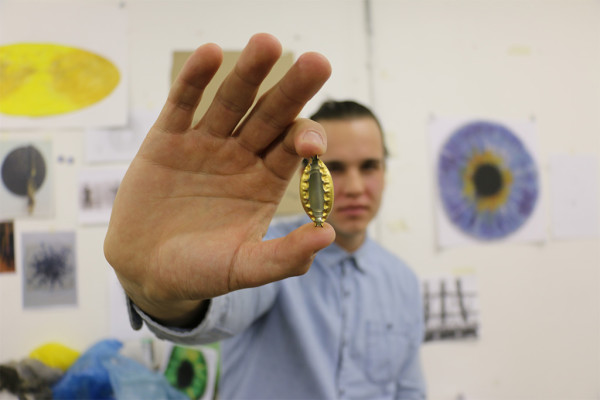 Most recently Soal, received the Top 30 Taxi Art award.Soal, who has always been a traveller, was born in Pretoria and moved to Port Shepstone in KwaZulu-Natal with his parents. The 22-year-old then relocated to Johannesburg where he crafted most of his artistic passion, when he was six years old.
His early memories of art are influenced by his upbringing in an artistic home with a father who is an artist and a grandmother training him in watercolour painting.
Soal’s use of bottle caps for his art work was inspired by a walk in Braamfontein. “I just saw a glimmer of gold shinning on the pavement and I just got excited,” he says. “I thought it was real gold, and to my surprise it was just a bottle cap laying in dirt.”Soal linked the gold bottle caps laying in the street to the Johannesburg landscape being regarded as the “City of Gold”. Through the use of bottle caps, Soal is able to make these parallels visual through painting and sculpture.

“My art is about noticing random little moments that speak about bigger things,” he says.