The Wits Ladies hockey team put in a good performance in their Varsity Hockey semi-final despite losing to Tuks.

The Wits Ladies’ hockey team lost 3-2 to the University of Pretoria (Tuks) in the Varsity Hockey semi-final on Monday, May 15, and thereby lost the chance to make the final of the tournament.
Tuks started out as the stronger of the two teams and ended the first half 2-0 up.

Wits fought back in the third chukka as Nicole Smith levelled the scores before Izelle Verster netted what proved to be the winner for the Pretoria side.
Kelly Wrensch, captain of the Wits side, said that the team played well in the semi-final but that they didn’t take all of their chances when it mattered most.
Wrensch also said, “The team has formed a really tight bond and everyone gets on really well. We are working really hard to improve our game a 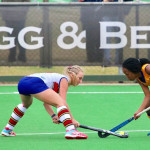 Wits lose out to Tuks in close Varsity Hockey semi-finalnd our standards so that we can go one step further in the next tournament.”

She said the team had had a good tournament and that she felt many of the teams had underestimated them.
“I think they were taken by surprise at how well we played and how far we got,” Wrensch said.
Wits coach, Pietie Coetzee-Turner, said that the team had come a long way in the last three years and that they had focused heavily on their fitness and developing their skills during that time.
“We had a good base to build on, but knew the areas that needed work. Even though we are disappointed not to make the final, we started the tournament with the aim of reaching the semi-final stage, which we did,” Coetzee-Turner said.
The next tournament on the calendar for the ladies side is the University Sport South Africa (USSA) event, taking place at the beginning of June where Wits and UJ will be co-hosts.
Coetzee-Turner said that the side would have minimal changes “to ensure continuity within the squad”.
Tuks will play Maties in the final of Varsity Hockey on Monday, May 22, after the Stellenbosch side beat North West University 3-2 in the second semi-final.