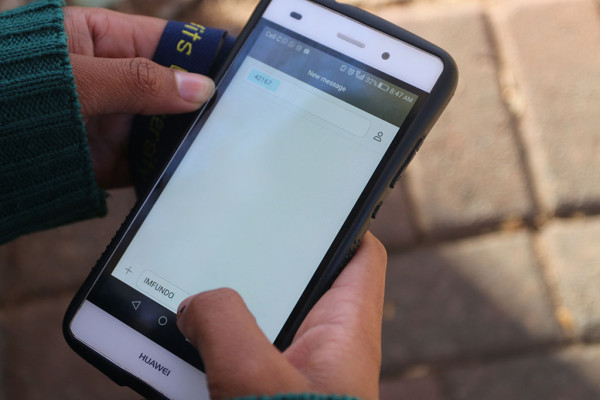 By SMSing #Imfundo to 42167, R30 will be donated to the Wits Humanitarian Fund. Photo:Odwa Mjo

The #Imfundo campaign was started by the SRC in January this year after many disadvantaged students failed to secure financial aid from sources like NSFAS. The campaign was expected to be fully functional at the beginning of the academic year, but was delayed due to legal concerns. The campaign intends to raise funds through an SMS system where members of the public will be able to donate R30 per SMS. The money raised will go to the Wits Humanitarian Fund which is overseen by the office of the Wits vice-chancellor, Prof Adam Habib. The fund will aid students struggling with historical debt.

SRC Social, Community Development and Fundraising Officer, Lindokuhle Ntumba, says that the SRC has been experiencing a great deal of donor fatigue and therefore they have had to be more strategic about their fundraising methods.

“We wanted to see if we can get all corners of society to participate in funding higher education. They know that students sleep in the libraries and shower at the campus gym,” said Ntumba

The campaign is expected to run for three months, from May to August, because of the contract that the university has with Channel Mobile as the service provider.

The SMS line (42167) has officially started while the actual launch of the campaign will take place on May, 30.