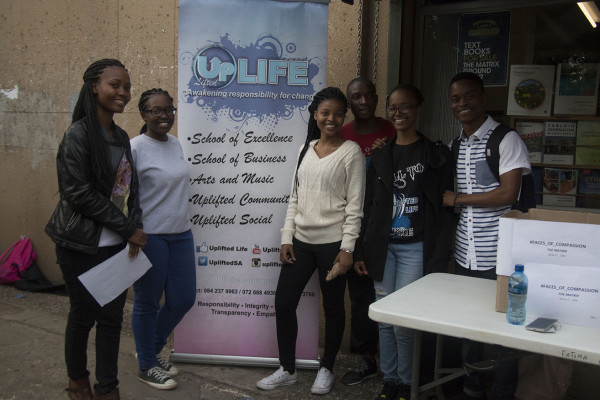 A WITS society is running the Faces of Compassion campaign to collect non-perishable food and toiletries for a high school in Soweto as well as contributing to the food programmes run by the Wits Citizenship and Community Outreach (WCCO).

The collections for the campaign were officially made from April 27 to May 6 at several Wits residences as well as outside the Matrix. Collections are still being accepted at the WCCO. The collections will be equally divided between Reasona High School and the WCCO.

Betty Mothoa, chairperson of the Uplifted Life society, says the campaign was inspired by a church fundraiser.

“We thought that we could put another face to faith and call it a ‘face of compassion’ and donate to the school in Soweto. It was after our discussions with the WCCO that we realised we could donate half of it to them and the rest to the Soweto kids,” she said. The society also runs a tutoring programme at the school.

Mothoa said the campaign has been successful and students have been responsive to their requests. “We had successful drives at Sunnyside and Men’s Residence, South Point and Barnato. The people were really open to the campaign and gave freely,” she said. The campaign was advertised on social media, VoWFM and in the campus tutorial groups that the society coordinates.

“We are trying to raise awareness and for people to continue helping out beyond our initiative. We also just want to give back to the community in and around Wits,” Mothoa said.

The distributions at the school will be done together with an official who will help them to identify the children that are most in need of the donations.

They hope to make these deliveries before the exam season starts.