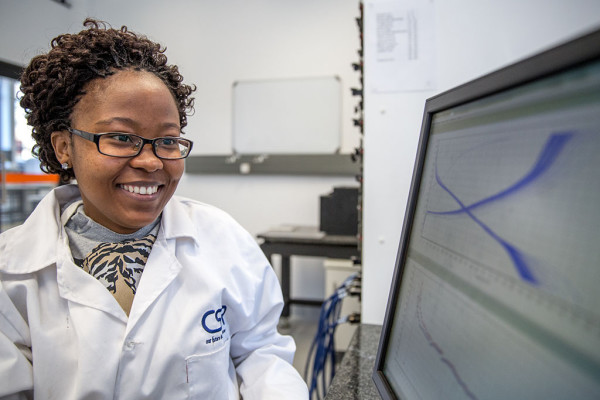 CHARGED UP: Funeka Nkosi will be heading to Germany for prestigious Lindau Nobel meeting Photo: Provided

A WITS PhD student, Funeka Nkosi, will participate in the 67th annual Lindau Nobel meeting, which will be taking place in Germany in June this year. Nkosi is among five other South African scientists chosen to attend the event.

Once every year, this prestigious gathering brings together remarkable students and post-doctoral researchers from all over the world along with 30 Nobel Laureates. The meeting focuses on the three natural science Nobel Prize disciplines of physiology and medicine, physics as well as chemistry.

Nkosi and the other South Africans were nominated by the Academy of Science of South Africa to take part in the event.

Her PhD research focuses on improving the performance of lithium-ion batteries, which are batteries used in devices such as cell phones, laptops and cameras.

“Lithium-ion batteries do not last longer, for example, a cell-phone when it’s new you charge it less and when it gets old you have to charge the battery every now and then,” said Nkosi.

She hopes that her participation in the meeting will result in the development of international research networks that will result in scientific collaborations, which will be helpful in growing the research in lithium-ion batteries and energy storage materials in South Africa.

“I desire to meet [all] the Nobel Laureates coming to the meeting.  To engage with them and other young scientists, exchange ideas and views. I want to learn from them, be inspired and motivated to do great work in science,” said Nkosi.

Nkosi is one of 400 other young scientists around the world and one of 180 young female scientists selected to attend the meeting. She told Wits Vuvuzela that women should take advantage of the opportunities available to them.

“There are a lot of opportunities available for women in science. Actually more women are needed in science,” she said.