THREE Wits University Frisbee players have been selected to join the South African squad set to compete in the 2018 World U24 Ultimate Championships to be held in Australia.

Paul Nussey, third year Bcom Finance, is one of the selected players and captain of the South African squad. He said that the final team was selected after training camps and trials held in December and January. “We had three training camps, one in Johannesburg and two in Cape Town. The final team was chosen afterwards,” said Nussey.

Head Coach Andy Oliver said, “The key thing is the skills in general, their personality and how they played and gel with the team.”
First year BSC student Meret Goosen and third-year medicine student Rubina Valodia are part of the 26-people squad who were selected earlier in July.

“Having three people selected inspires people to believe that they can have this kind of experience … three players going to an international competition who will then come back and obviously improve the Wits club from the grassroots, which is huge for the club and also the prestige,” said Nussey.

What is Ultimate Frisbee?

Ultimate Frisbee is a high intensity sport played on a field similar to an American football field. The aim is to score the disc in the end zone which is at the 100 metre end of the field. The sport is similar to netball in the sense that a player is not allowed to run when in possession of the disc.
There are seven people who play on each team. Ultimate Frisbee is a mixed gender sport in South Africa, at the moment there are four men and three women. The sport is unusual in that it officiates itself. There is no referee even in the higher levels.

Players on the field are able to call shots and resolve issues while they play. According to Nussey, South Africa does not have the base of players and expertise to have officials or observers as they do in the USA. “But even in that situation, the sports tries to ensure the integrity and the spirit of the game is upheld by players on the field and not by an official,” said Nussey. 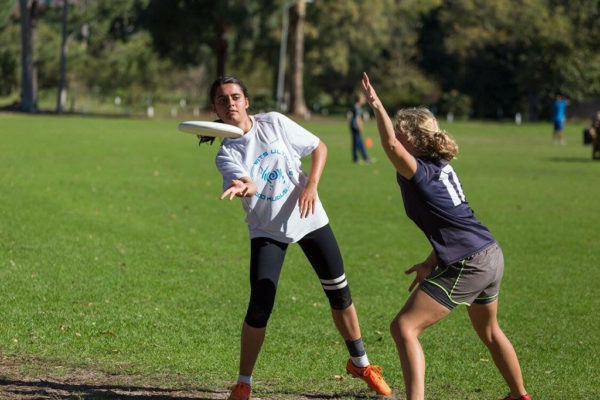 Ultimate Frisbee is a mixed gendered sport, in South Africa the gender split is in favor of women. Photo: Provided