Writing and Rioting from the frontline

Wits Fallists and activists launched their book titled Writing & Rioting: Diaries of the Wits Fallists. The book unpacks the experience of the #FeesMustFall through the words of individuals who were active participants in the protests. 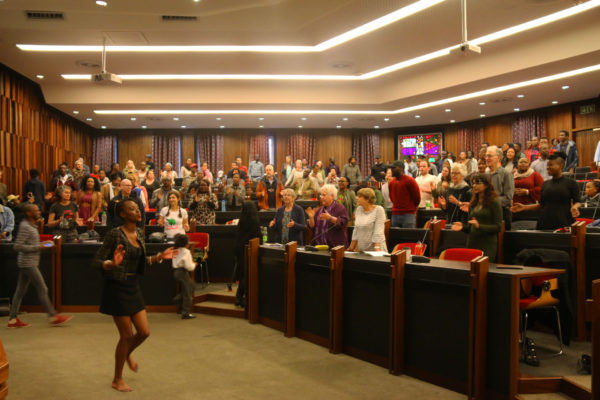 Wits fallists and activists reflected on their individual experiences of the #FeesMustFall at the launch of their book, “Rioting & Writing: Diaries of the Wits Fallists.” The launch was held at Solomon Mahlangu House on July 27.

The writers collaborated with the Society Work and Development Institute (SWOP) to publish the book which reflected on their subjective experiences and provided critical analysis of the movement. The book consists of contributions from 19 fallists and academics who were active participants in the #FeesMustFall protests either on the frontline or behind.

The book launch was accompanied by a panel discussion which consisted of academics and activists.  Co- editor of the book, Hlengiwe Ndlovu, said that the book was prompted by the need for students to tell their experiences instead of being misrepresented by the media.

One of the panellists was 1976 Student Movement activist, Danny Montsitsi, who spoke about the need for movements such as #FeesMustFall to have an organizational structure and the need to speak with one language in the movement.

The central themes the book tackled were of intersectionality within the movement including the tactics, gender, power and identity as well as student and worker solidarity. A panelist, Malose Langa, said that workers should have had the opportunity to write about their experiences considering the student-worker solidarity through the #FeesMusFall and the #EndOutsourcing movement.

A contributor, Sello Mashibini said, “My contribution to the book was mainly about the university as a site of struggle by that I mean the different contestations that emerged within Fees Must Fall in 2015. Each contestation transcends gender, race, politics, political parties and the move from power.”

Masters student and contributor Andile Mthombeni spoke to Wits Vuvuzela about her contribution to the book saying that, “The experience of participating in the Fees Must Fall as a black woman who embodies not only just being black but the class struggle as well of being poor within the Wits institution.” Mthombeni’s chapter reflects on how the very same Solomon Mahlangu House where the book launch was held was once a place of refuge and a home for protesting students during the FMF movement.

The book launch unpacked the dominant discourses related to the cause for free quality education in the country including decolonization, black radical feminism and Pan-Africanism.