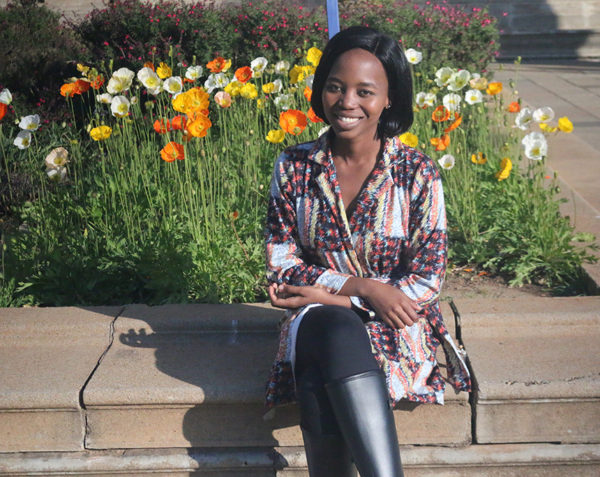 Activist, fashion entrepreneur and law student. These are just a few roles with which 24-year-old Wits student Anele Nzimande can be identified.
Since enrolling at Wits in 2012, Anele has been a committed student activist and most notably contributed to the negotiations to end outsourcing at Wits University. Additionally, she has worked at the centre for Legal Studies, been a contributor for The Star newspaper, a commentator on eNCA, contributed to a chapter in a book by the SABC Foundation, and most recently, launched her fashion label, Aluna.
Fashion was always a passion of hers and at the end of 2016, she made the decision to actively pursue it without any formal training. Nzimande’s intention in creating the clothing for Aluna is that it appeals to women who want to be stylish with a touch of femininity. She achieves this by taking inspiration from the likes of US singer, Solange, and US civil rights activist, Coretta Scott King. “Fashion is part of our shared language and a marker of the times,” she explains.
Her interest in gender-based rights and the emancipation of the marginalised has also formed part of the inspiration to become a fashion entrepreneur, because she believes that she is in the business of transforming and empowering people. One of the socio-economic issues she would like to address through her business is the minimum wage.
Nzimande hopes to pursue a career in social justice and human rights law. As for Aluna, she intends to pursue it both as a political experiment as well as an opportunity to create a legacy for herself and her future children. She hopes that other students will not hesitate to pursue multiple passions too. “We are more than the respectable professions and degrees we do.”