The Steinhoff Wits internal Rugby league is drawing closer to the semi-final stages as it hosted its round of six games this Wednesday August 2.

The Steinhoff Wits internal Rugby league hosted its round of six games at the Wits Rugby stadium on Wednesday August 2. In total there were three matches played. 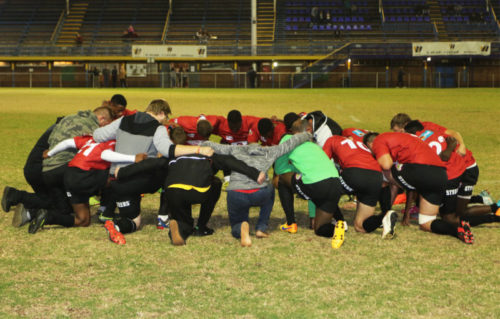 The first encounter of the day was between Steinhoff Monash and Steinhoff Masakane. The former dominated the proceedings from the onset keeping possession of the ball and restricting play to their opponent’s side of the field.

Steinhoff Monash’s dominance finally paid off in the 15th minute, as the left wing Themba Bhebhe scored their first try. Scrum half Terence Longworth then stepped up to score the subsequent conversion kick.

The game between these two sides was a very physical affair with both teams displaying great skill. Steinhoff Masakane were, however, let down by poor passes and a lack of communication between their attacking forwards.

Man of the match, Longworth, said, “They overcame because his team (Steinhoff Monash) had a better structure and unlike their opponents, they took advantage of all the opportunities presented to them.”

“The game was played in good spirit and both teams brought their A-game,” said Steinhoff Monash coach Johann Waldeck.

The second game saw the Medics pitted against the Steinhoff Men’s Res. From the onset, it was clear that the Medics would stroll to victory as they opened the scoring within the first five minutes of the game. It was downhill from then on for Steinhoff Men’s Res as the Medics scored five more tries and two conversions to seal a convincing victory.

Concurrent to this game, there was another fixture underway at the Wits Rugby stadium B. Steinhoff Titans outclassed Steinhoff Pearson 31: 0.