Rape talk organised in direct response to the social media comments made on a Facebook post which detailed the story of a Wits medical student who was allegedly assaulted. 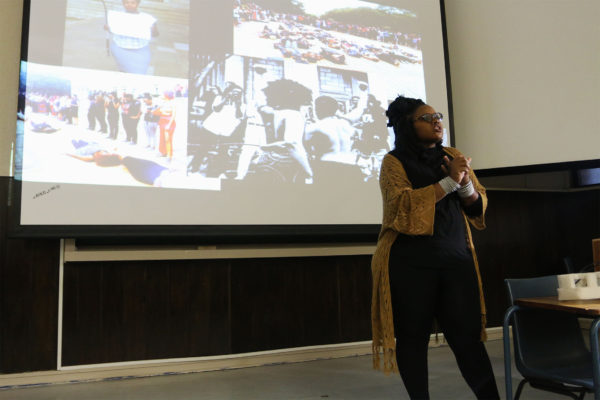 WOMEN’S month was ushered in with a rape culture dialogue hosted by a collective of feminists called We Should All Be Feminists (WSABFeminists) at Wits on Tuesday.

The “Silence is Not Consent” talk was organised in direct response to the social media comments made on a Facebook post. It detailed the story of a Wits medical student who was allegedly assaulted by an Economic Freedom Fighters Student Command member from the University of Johannesburg (UJ).

Sarah Mokwebo, a Masters candidate in built environment  studies and a member of WSABFeminists felt that the comments made on social media were “scary”. Mokwebo said, “If these are the views that people have about rape and rape culture, then we have a long way to go.”

The talk did not have a formal structure and the floor was open for people to ask and answer questions. WSABFeminists felt that rape and rape culture are issues that affect everyone and that everyone’s opinion was important. Mokwebo showed a presentation about the previous activities and demonstrations about rape at higher education institutions since 2015, such as the #RUReferenceList at Rhodes University.

The dialogue included conversations about what consent means in regards to sexual relationships and the misconceptions that come with women exercising their sexual agency. There were also discussions about the institutional response to rape cases, as well as criticism about rape being treated as a regular criminal issue.

Shiluva Hlungwani, a second year BSc computer science student said, “The talk is something we needed. Rape is one thing we need to talk about.”

The talk addressed the Men’s Residence students escorting female students in the Braamfontein vicinity at night.  This sparked a spirited discussion about whether or not the Raiders should be praised for trying to protect their fellow students.

Third year BCom accounting science student, Siphamandla Xwabe, told Wits Vuvuzela that he felt that the topic diverted from the intention of the talk.

“We did not express what we wanted to address about rape culture. The Men’s Res topic diverted the conversation,” he said.

We Should All Be Feminists is not a registered society as yet, according to Mokwebo. The collective has also been involved in rape demonstrations around campus and they have also hosted a poetry night.