Bidvest Wits have booked a place in the MTN8 semifinals with their 4-3 win against Lamontville Golden Arrows. But Friday’s clash took a toll on the team, which had to fight its way back from behind twice, and they’ll have to show the same resolve on August 26/27 if they want to beat Benni McCarthy’s Cape Town City, a team that has built a reputation for punching above its weight.

The Clever Boys, who won the bruising game on penalties, will be playing without their newcomer defender Slavko Damjanovic. He received a straight red card in the 21st minute for a high tackle in which his boot connected with Arrow’s Siphelele Magubane’s face.

Wits’ only stand-out performer in the Friday quarterfinal encounter, left wing Maliele Vincent Pule, took a knock to his left ankle and had to be substituted by Malawian international Gabadinho Mhango.

Wits dominated possession form the onset and came close to scoring twice within the first four minutes of the game, only to be denied by the upright [is this the goal post?] and good defensive work by Arrows. 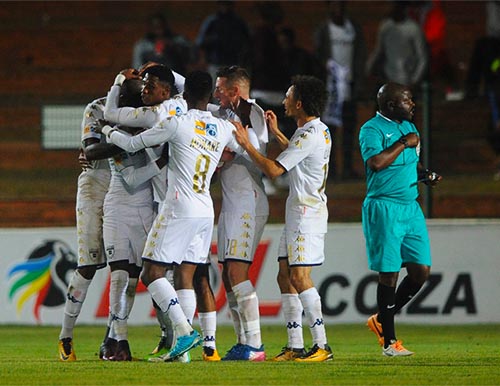 The two near misses had Hunt up on his feet shouting frantic instructions and miming his disapproval, but it seemed to lift the team’s spirits because left wing Maliele Vincent Pule then came to the party, weaving past the Arrows midfield to link up with left back Sifiso Hlanti, whose cross was disappointingly over hit.

Arrows quickly counterattacked, getting the ball to their right winger, Wayde Jooste, who floated in a delightful cross that was guided to the back of the net by striker Lerato Lamola.

Hunt had retained most of the players that won him both the MTN8 and PSL trophies last season. The only new introductions to the starting line-up were right back Reeve Frosler, central defender Slavko Damjanovic , and right wing Daylon Claasen.

The coach was made to rue his changes in defences when Damjanovic was given a red card and sent off the field.

Arrows took full advantage of their one-man advantage and tore through the Wits defence, with Zimbabwean Kudakwashe Mahachi adding a second goal in the 24th minute.
Wits’ Pule immediately hit back, but was brought down in the penalty box. Striker James Keene slotted the penalty home without trouble to pull one goal back.

The first half looked like it would end with Abafana Bes’thende leading 2-1 however, the assistant referee added five minutes extra time for the foul on Magubane.

Wits pushed for an equaliser, but, in the process, Hlanti was fouled by Arrow’s right-back Siyabonga Dube, who was already on a yellow card and was sent off. This left the teams equal on 10 men each.

The second half was just as eventful as the first.

A wayward back pass by experienced Arrows defender Lehlohonolo Nonyane allowed Keene to score an equaliser for Wits in the 61st minute.

Then a goal in the 88th minute by Wits defender Frosler was disallowed, and a free kick was given by the referee, who claimed that Frosler had infringed on Arrows’ keeper.

With the score at 2-2, the game went to extra time. With the pressure mounting, an altercation broke out between Hunt and Arrows coach Clinton Larsen on the side-lines, which resulted in both men being shown red cards.

The game ended on a sudden death penalty shootout during which Wits had to dig deep yet again – after missing both their opening spot kicks – to win 4-3 and secure their place in the semifinals.
The other MTN8 semifinal match will see SuperSport United play against Martizburg United.