Getting beyond the red tape

Women’s Day was celebrated with a dialogue which covered the “red tapes” that hinder women’s success and how they should be dealt with.

Women need to allow themselves to embrace their purpose and be functional leaders in all walks of life. These were some of the main points addressed by the panellists at the ‘Beyond the Red Tape’ women’s dialogue on Women’s Day. 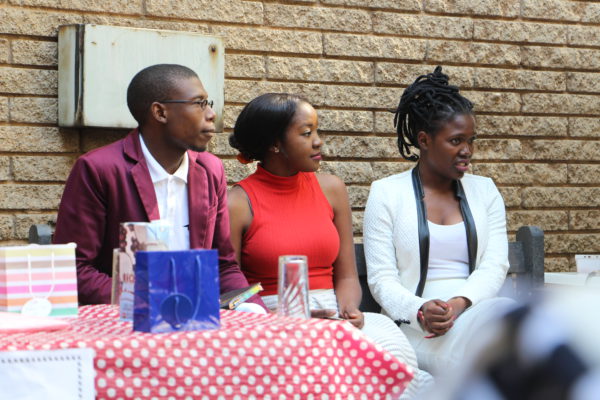 The discussion, which took place at Rennie House, included female panelists Nontobeko Nkosi, a member of the Wits Students Representative Council, and Karen Mwendera, a former mobile journalist at eNCA. The panel also included ambassador of Club Leadership and author of the book Katrina, Mafule Moswane.

The discussion opened with event organiser, Palesa Mofokeng, explaining the concept of the ‘red tape’ in our social, academic and professional lives. “The red tape is described as the enemy to women’s progress. They are there to often limit, cage, obstruct and hinder the view we see our lives in,” said Mofokeng.

Nkosi represented women in leadership positions, as she discussed the concepts of purpose and functional leadership. Speaking on the demeanour women need to adopt in the office, she said, “I am a very strong willed woman… If a man is not intimidated by that, he will be threatened by it and so the treatment I will receive will be harsh. I constantly have to prove myself and being a women means that I have to prove myself beyond limits.” Nkosi further spoke on the role of women in leadership.

“Women are born and raised to be functional leaders’ more than positional leaders like mothers and caregivers,” she said, adding that women need to take advantage of this natural talent. “Your dreams are valid more than anything,” said Mwendera as she took to the stage to discuss women’s power.

Potential is derived from the word ‘potent’, meaning power. I can do all things through Christ who strengthens me and the words ‘strength’ means power. My understanding is God’s power which is potent or potential,” said Mwendera. The young journalist discussed the lessons she had learnt in her journey to acquiring success in the media industry.

“When you want something, all the universe conspires in helping you achieve it and now I am proud to say that the experiences and knowledge that I got, moulded me to who I am and where I am right now. Take whatever situation you are in and make it better,” she said.

Describing himself as a male feminist, Moswane, who was the only man on the panel, discussed the role of men in motivating women. He said, “It is our duty as men to rewrite the wrongs of our past and allow women to play active roles.” Moswane added that men also need to step away from their pride and listen to women. “We limit ourselves to certain spaces, yet we should be open to learn about the spaces we are not accustomed to.”