Reflections on dissent at the 2017 Ruth First Round Table.

A robust discussion about different forms of dissent in South Africa was held at the 17th annual Ruth First memorial roundtable on August 17.

The roundtable was held last night at Wits University’s Braamfontein East campus in commemoration of the 35th anniversary of the assassination of journalist and political activist, Ruth First. The roundtable discussion, moderated by journalist Redi Tlhabi, was comprised of Dr Makhosi Khoza, Professor Raymond Suttner, Mbali Ntuli and Thandeka Gqubule.

Member of the Ruth First Fellowship Committee, Indra de Lanerolle, addressed the gathering with a personal reflection on the work of Ruth First and the principles for which she stood. De Lanerolle spoke about her dedication to her work.

“Her dissent was loyal. It was fierce, it was argumentative but it was loyal,” he said.

ANC Member of Parliament, Dr Makhosi Khoza, spoke of her decision to dissent within the party and the consequences of her actions. Khoza was fired by her party from her position as chairperson of Parliament’s public service and administration committee just few hours before the roundtable.

Dr Khoza said that she was choosing democracy over kleptocracy when she made the decision to speak out against President Jacob Zuma. She considered the possibilities of what Ruth First’s contributions would be to the members of the ANC and the important questions that she would be asking of them. She would ask, “Are you still in the pursuit of the African National Congress Mission or are you in pursuit of protecting a corrupt system and a corrupt individual to a point where you will choose this person as opposed to choosing the people?”

“We need to say to the African National Congress, thank you for what you have done, for your contribution but you were not alone…we no longer need you if the ANC is going to do to our people what the Apartheid government was doing to our people,” she said.

“I come from a background in the struggle where I was involved in undermining an illegitimate government. I paid the price and was willing to pay the price for that because I was linking my cause with that of the oppressed peoples of this country,” he said.

Suttner also stated his discomfort with the word “dissent”. “I don’t like this word dissent. I wasn’t only dissenting. I was also, like Ruth First, Nelson Mandela and others, advancing a new democratic consensus. We were dissenting in one sense but we were also representing.” He also said that not all dissent was justified and that it was only justified if it was “linked to a claim for freedom.”

Suttner said that his decision to leave the party was because the ANC had lost its moral compass.

DA member and former youth leader of the party, Mbali Ntuli, said she drew inspiration for her dissent from her fellow panelists who were older and more experienced than herself. She provided the perspective on the challenges faced by herself as a young woman in a political party.  “The worst place to have dissent is within a political party,” she said. 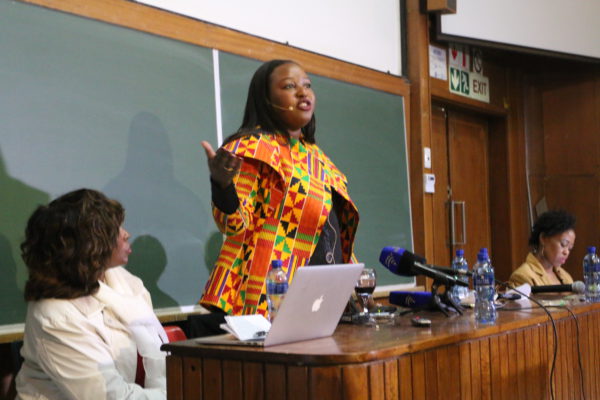 “Political parties are so comfortable for you to be a dissenting voice as long as you’re not within their political party,” she said. She also noted the praise she and Dr Khoza received from opposition parties for their dissent.

Ntuli spoke of the internal backlash she received for her dissent, including her open social media criticism of former DA leader Helen Zille. She went on to criticise the DA’s social media policies that restrict members’ freedom of expression.

She added that her decisions to dissent were based on principal.

Former SABC journalist and author of the Thuli Madonsela book, No longer Whispering to Power, Thandeka Gqubule, criticised people in society that chose to ignore the events happening in the country.

“I wonder about the indifference especially of intellectuals and journalists who have the resources,” she said as she questioned the moral culpability of those influential people who remain silent.

She also paid tribute to her fellow SABC 8 journalists who endured threats to their lives as a result of their criticism of their public broadcaster’s policies. “The agenda of the SABC became to propagate the agenda of those in power,” she said as she explained their decision to dissent.