#WorthBleedingFor campaign back at Wits indefinitely

The Wits chapter of Amnesty International has relaunched their #WorthBleedingFor campaign indefinitely. 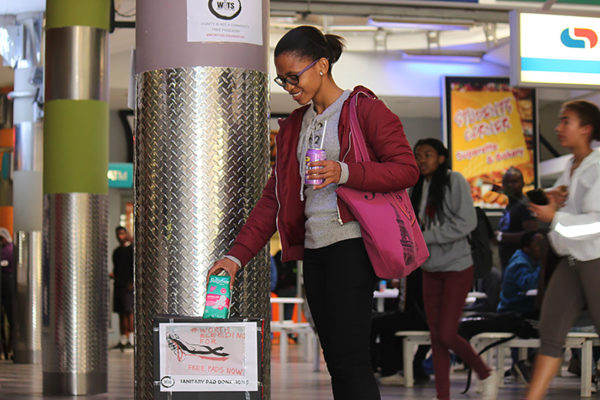 Witsie Kebuile Moseki donates a packet of sanitary pads at the #WorthBleedingFor donation box in the Matrix.

The Wits chapter of Amnesty International is partnering with other Wits societies and civil society organisations to relaunch of their #WorthBleedingFor campaign, with the aim of improving access to sanitary pads.

The campaign, which demands the provision of free sanitary pads across Wits campuses, relaunched on August 7 with pad donation boxes being placed across Wits main campus. Last year’s the campaign was interrupted by the start of the #FeesMustFall protests. According to Wits Amnesty International chairperson, Raees Noorbhai, this year’s campaign will involve various organisations, such as the Law Students’ Council and the non-profit organisation, Dignity Dreams.

According to, #WorthBleedingFor spokesperson, Haafizah Bhamjee, the coalition was motivated by Wits management’s lack of response to a petition for free pads by the campaign last year. Bhamjee said that this lack of response was “a sign of patriarchal constraints because they are too afraid to speak about these issues and it’s a taboo to speak about something like pads. Even though it’s something women need fundamentally and it’s not a luxury, because people are afraid to address it, nothing ever gets done.”

Wits dean of student affairs, Dr Puleng Lenka-Bula, denied the lack of response on the part of the university management, saying, “We have created processes and systems through campus health and wellbeing, through Wits Citizenship and Community Outreach (WCCO) and through residence life, which respond to questions of sanitary assistance for students who require them.”

Despite the use of donation models, Noorbhai said that the coalition is working on more feasible solutions, including negotiating subsides from pad suppliers so that the university is able to by the products at cost. “The university is capable of fitting the bill, which is why our demands still sit with the university,” said Noorbhai

Third year BA student, Yolanda Mbedzi, echoed Noorbhai’s sentiments. “The university should fund it because they already take up so much of our money, but I haven’t seen them use the money for anything good or beneficial for us as students, so the least they could do is fund something as important as pads,” she said.

According to Noorbhai, the campaign will continue indefinitely, until free sanitary pads have been secured across Wits for both workers and students.