“Is leadership a reflection of society?” 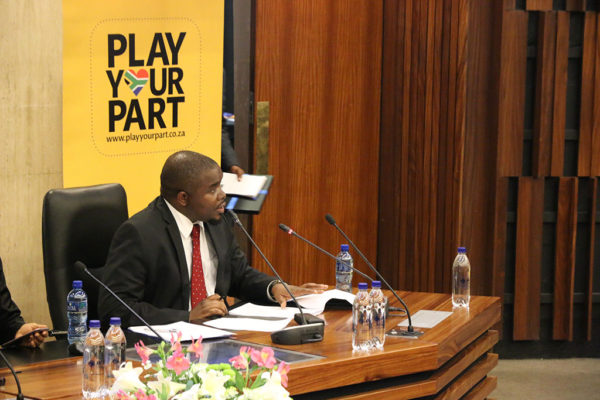 “Politicians come from the general population. If the average level of consciousness is high [in society] then the average level of consciousness of our elected leaders will also be high.” These were the words of Deputy Public Protector, Kevin Malunga, who spoke at the Thinker’s Symposium hosted by the Wits chapter of Golden Key, an international academic society, at Wits on Tuesday, August 29.

Malunga said those who hold leadership positions represent, to a large extent, the characteristics that are idolised by individuals in society.

Using as an example, Deputy Minister of Higher Education and Training Mduduzi Manana, who was accused of assaulting a woman at a club in August, Malunga said:.  “Do you condemn Manana when you yourself are assaulting your girlfriend?” he asked. He added that it was also society’s response that led to Manana’s resignation.

Actress and producer Nonkululeko Ndlovu emphasised how the media and film play a role in portraying women in leadership as “aggressive” and “angry”, making reference to Oliva Pope, a fictional character played by actress Kerry Washington on the American television series The Fixer, formerly known as Scandal. “There is something we are doing wrong both in media and society” she added.

Post graduate LLB student, Mbali Mngomezulu said, “It [leadership] reflects certain ways of thinking in our society not the whole picture. Some of our leadership is advanced, and even though they don’t hold the highest positions, they are effective in the roles that they currently hold and they don’t get the same limelight and exposure as the president or ministers.”

Chairperson of the Wits Golden Key, Sabica Pardesi, said the aim of the symposium was to find solutions through the youth using the Golden Key’s three main pillars: leadership, service and academics.