Witsies think the application process to the University is “exclusionary in nature”.

WITS hosted a seminar under the theme cyber-security and techno-politics in South Africa at the Tshimologong Digital Innovation Precinct earlier this week.

Speaking on Tuesday, August 29, Wits Media Studies lecturer Dr Iginio Gagliardone explained how the term techno-politics was coined to bring awareness of the existence of “the politics around technology and how we need to take them seriously”. 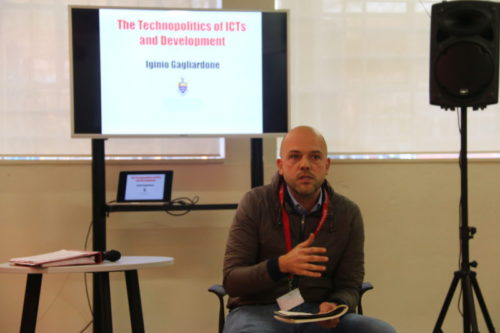 Gagliardone said, “Technology could be a liberating or oppressive instrument.”

“The university application process is exclusionary in its nature. Firstly, the university ‘encourages’ students to apply online and even when you come to the institution in person, you get told that you need to log into the admissions webpage and print out an application form.”

“This leads to the recycling of black poverty and is a form of structural racism,” she said.

Khumalo said students who live in rural or suburban areas without internet connectivity or who cannot afford data are automatically excluded. “They are not afforded the chance to better their lives and that of their families,” said Khumalo.

Dr Josiah Nyanda, who lectures English and Critical Thinking a course designed to develop the written and verbal communication abilities of first year students via the medium of English literary texts, added that a bulk of our students coming from a rural background and are already presented with a barrier when it comes to the university’s digitised application system.

“Most have to leave their rural home and travel to the nearest town for them to access the internet so that they may apply to the university. These are avoidable costs that deter some students from applying,” said Nyanda.

Igsaan Halim, call centre manager at Wits University, deals with admission inquiries on almost a daily basis. He said, “Indeed the university encourages students to do online applications as the process is less tedious, however, in cases where students do not have or cannot afford to utilise such facilities, they may apply via mail.”

Khumalo challenged this, saying the fact that the university does not have printed application forms shows how little they care for such an application process. “The student enrolment people tell you to go and download the application form online and then mail the letter. What they fail to understand is that if I could access the internet to print out the form I would have just applied online,” she said.

At the seminar though Gagliardone, who is also the author of the text The Politics of Technology in Africa, highlighted that technology does not only have negatives. He used the example of Ethiopia and how it utilised digitisation for good. Ethiopia was able to link all high schools with televised lessons. This meant that the education received by students in urban areas is the same as those in rural areas.