BRAAMFONTEIN was consumed in a sea of red as mass protests against President Jacob Zuma and state capture led by Cosatu and the South African Communist Paryt (SACP) got underway from Cosatu House on September 27. 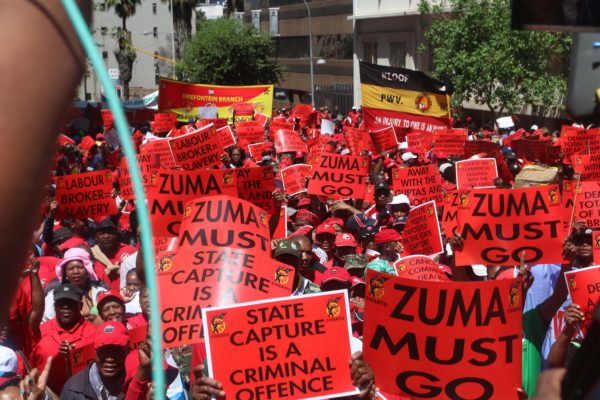 Its Gauteng provincial chairperson Vusi Monyela led the march that started from corner Jorissen & Simmons streets. Speaking to protestors in front of Cosatu House, Monyela said the marches were against “State capture by political leaders, the private sector or any other family that has or seeks to capture the state”.

He also added that, “The protests sort to recapture the nation and place it in its rightful hands, those of the people. We also say to President Jacob Zuma must step down.”

The march proceeded to the City of Johannesburg’s head office a few hundred meters away from where it initially started. Here, Monyela explained that the march had made its way to the mayor’s office in order to hand over a memorandum to Johannesburg Mayor, Herman Mashaba. “We have arrived at the house of the mayor who has destroyed jobs and service delivery in the city”, said Monyela. 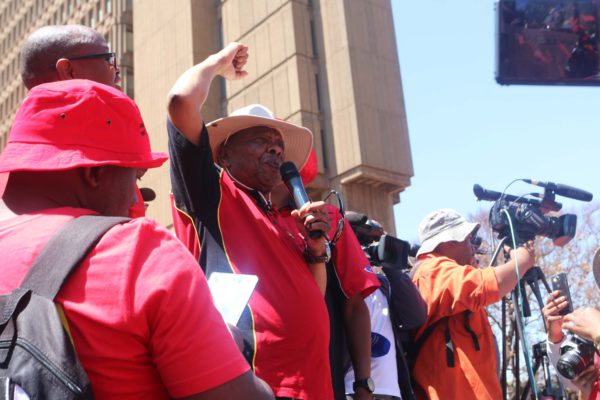 The large number of protesters waited in song and dance for Mashaba to come and collect the memorandum. “We are ready for Ramaphosa”, was the song that kept the thousands in attendance in high spirits, showing their support for the current deputy president of South Africa to take the reins at the ANC conference in December.

Member of mayoral committee for public safety, Michael Sun accepted the memorandum on behalf of the mayor, which led to Cosatu calling Mashaba a coward for not coming to accept the memorandum himself.

Some of the protestors in attendance expressed gratitude over the large attendance. Joe Nkosi an SACP affiliate said, “The large turnout shows that the majority of our citizens disapprove the manner in which our country is being led. It is only a shame that young people do not seem to recognise the importance of such protests, being in Braamfontein where the population is largely students, it is disappointing to only see a few of them in attendance.”