Swimming pool on Wits main campus ‘costs too much to run’

Wits Sport is considering removing the only pool on Wits main campus. 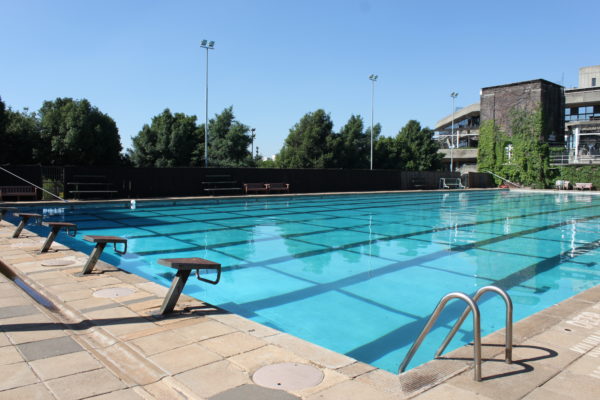 Wits Sport and the Wits Sport Council are considering removing the pool on main campus.

Wits Sport and the Wits Sport Council (WSC) have begun informal discussions on a plan to remove the only Olympic size pool on the Wits main campus in a bid to cut costs.

The discussions, which started at the end of last semester, are the first step in a longer process of reducing the costs at Wits Sport and improving aquatics at the university.

According to Director of Wits Sport Adrian Carter the idea to remove the pool originated due to the costs associated with running two aquatics facilities. These costs include maintenance, chemicals and electricity.

Carter told Wits Vuvuzela that “It costs approximately R40 000 to R50 000 per month to run the heat pumps at the main campus pool, these are simply no longer affordable.”

“Especially during these incredibly tough financial times in which the higher education sector finds itself. We find it hard to justify the existence of two 50-metre Olympic-sized swimming pools,” he added.

The discussions began during the tenure of Rubina Valodia as WSC chairperson.

According to Valodia, the aim is to focus all aquatic activities at the pool on Wits Education Campus.

“Adrian has said that we can make a proper aquatics centre on Education Campus, if we remove the pool on main. Then we can move the heaters from main campus to the pool on education, so all the resources will be concentrated on one pool. That means that the pool can be maintained properly and will be heated in winter, then the clubs will be able to use it all year round,” she said.

Kent Field, a second-year BA law student and swimmer, was against the idea of removing the pool. Field told Wits Vuvuzela that the removal of the pool, “Will make any water sport only have one other pool to train in and I don’t think that should happen.”

The pool is currently used by about 300 students, including clubs such as aquatics and social swimmers. Despite this, however, “it’s nearly never busy, you will get about five swimmers in the pool on a good day”, said Field.

The tentative suggestion from Wits Sport was to replace the pool with a test and exam venue, which can be used to relieve the pressure placed on indoor sports venues that are used for tests, exams and sports practices.

“Until now, we have had quite big problems with the use of sports space for exams. Hall 29 and Old Mutual Sports Hall are both used for exams, which means, a lot of the time, the clubs that use those halls can’t access that space.  It’s especially difficult during exams, but it’s a problem throughout the year because tests are happening in those halls all the time. The idea was, if the pool space was offered as an exam hall, then we could perhaps get more of our space in the sports halls back,” said Valodia.

According to Carter, these discussions are still at the early consultation stage between Wits Sport and the WSC.

No formal proposal has been made to Wits management yet.