A discussion on reporting under oppressive regimes affirms the importance of investigative journalism in holding power to account. 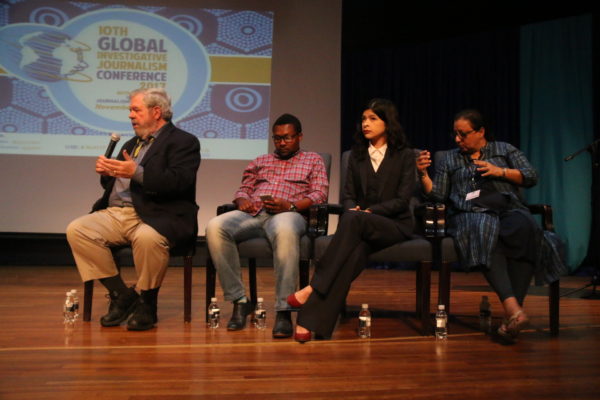 ON THE RIGHT SIDE OF HISTORY: Investigative journalists David Cay Johnston, Thandoxolo Jika , Patricia Evangelista and Ritu Sarin discuss the challenges and successes of reporting in autocratic regimes.

In the recent times, a new brand of authoritarian governments have come to power and using advanced technologies, have sought to undermine the work of investigative journalists. This was the message echoed during the plenary session on day two of the Global Investigative Journalism Conference held at Wits University today.

Each journalist spoke to a packed Great Hall about the challenges of practicing journalism in their respective countries.

Johnston said journalists are the only people who are paid to tell the truth and their duty to uncover the “hidden” truths without fear or favour, using new and innovative strategies.

“Journalists need to think of creative ways to do things and access information … Never forget the ‘little people’ who are often forgotten like janitors and secretaries, who are sometimes the most useful and important sources. Be fearless and never flinch always be fair even to the most awful people,” Johnston said.

Sarin, the editor of The Indian Express, said India’s investigative journalism environment is challenging due to the government deliberately creating a barrier between itself and the media, which defeats accountability and creates complacency.

“The prime minister speaks through social media and communicates through press releases, withdrawing from one on one conversations with the media. Now the media has stopped asking questions and some journalists are fine with just getting press releases.”

Evangelista said it is important to humanise stories in order to make civil society aware and more empathetic to the issues that they face. She said it is not enough to just report statistics and show the crimes against humanity, journalists need to hold everyone accountable.

“In the Philipines it is not that we don’t understand human rights but one day our government decided some people aren’t human. Follow the story, journalists are not the story. Always speak truth to power,” said Evangelista.

Jika agreed with his fellow panellists and said in closing, “We push so hard that our children don’t have to endure the same situations we face now, keep morality and keep those in power in check.”

The Global Investigative Journalism Conference runs from November 16 to 19 and hosts over a thousand delegates from around the world.