HEALTH FOCUS: Pap smears a necessity for young and old

Pap smear is a necessity for women young and old

Women between the ages of 21 and 29 are encouraged to get a Pap smear test every three years as the test is able to detect pre-cancer of the cervix before it turns into aggressive cancer.

Dr Nana Dlomo, a Gauteng-based general practitioner told Wits Vuvuzela that women should get a Pap smear once they are sexually active or from the age of 21. “If there is a concern or otherwise specified by a medical practitioner, the Pap smear can be repeated in six month,” she said.

Dlomo added that some of her younger patients are casual about health issues. “My younger university students are generally more uninterested in things even if the information is there for them through pamphlets and social media.”

” A Pap smear is not about the entire womb. A vaginal speculum is used to expose the cervix (an opening of the womb) where a specimen is retrieved. The specimen is then taken to a lab for testing,” said Dlomo. 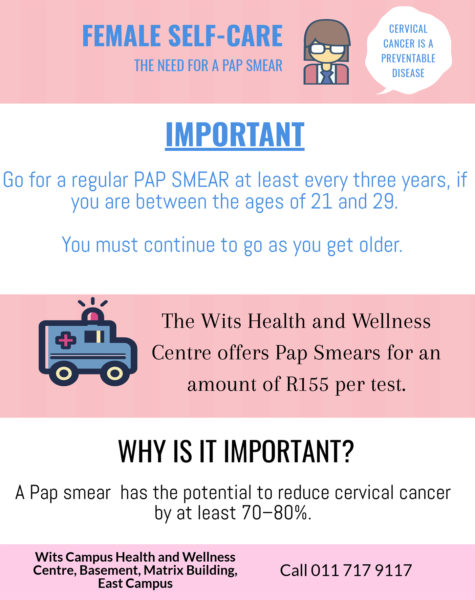 Of the 14 students that Wits Vuvuzela talked to about Pap smears, most said they did not consider the test a necessity with some saying they did not know what a Pap smear is.

Ntokozo Nkwanyana, 21, third-year BA general, said, “I have enquired about it but I am not sexually active so I don’t think it is necessary to have one done,” she said.

Third- year BA general student, Patricia “Buntu” Modiba, 22, said, “when I first heard the word Pap smear, I thought it was food. My friend later explained it to me but I still did not understand it or why I needed the test, I still don’t see a need for it,” she said.

Moloi told Wits Vuvuzela that the procedure only lasts a few minutes. “It is never comfortable to have someone between your legs, but the procedure itself is not painful,” she said.

“We have nurses that are responsible for health education. In September, which is cancer awareness month, we encourage students to come over for a Pap smear. We even have talks at Wits residences, but the service is available throughout the year,” she added.

FEATURED IMAGE: An info graphic with information on why a pap smear is important