Students have mixed emotions towards the network upgrade project. 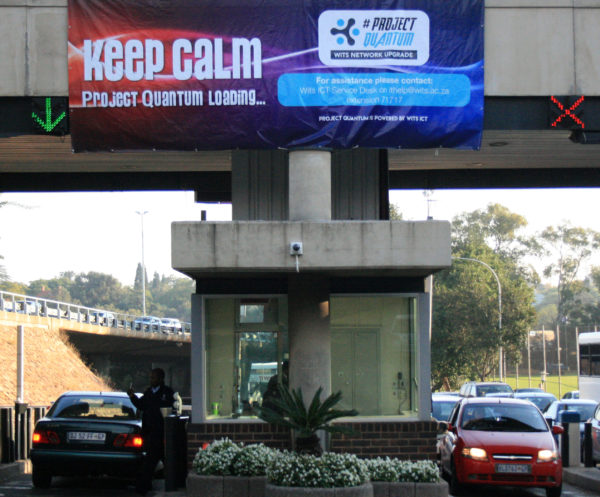 The roll-out of the new Wits University ICT infrastructure which was expected to improve Wifi access on the campus has missed the completion deadline of February 2018.

The upgrade known as Project Quantum involves the replacement of outdated cabling and upgrade of the network infrastructure across all the Wits campuses to improve services to staff and students.

Manager of Project Quantum, Nhlanhla Madide, said the process has taken longer than expected because of the old infrastructure on campus.

“The University has 40 years of cables running (sic) around that needs to be removed. There are electrical cables that are entwined with network cables which need to be dealt with carefully,” Madide said.

“The whole upgrade is to get us on par with other universities but we go further than that, this network project will also include security, it is going to be the most robust network in South Africa,” Madide added.

Rosa Kotsiovos, senior manager of Project Quantum, stated that the project occurred due to the increase in complaints about connectivity. The upgrade is to ensure that these problems are rectified. Kostiovos said, “The coverage was weak and there were issues with it, which was the initial reason why we went with the upgrade.

The project is expected to happen in phases with installations in buildings taking place on a month to month basis.

Masters civil engineering student, Makhosi Mthimkhulu, said that the WiFi on campus is terrible. “It doesn’t work, I have taken my laptop to the ICT help desk and still it doesn’t work. Even on my phone, it’s terrible.”

Zinathi Mhlonyane, third-year chemical engineering student, said that once the upgrade was announced in her res she immediately went to reconfigure her laptop at ICT. She added, “Since then I haven’t had any problems with my WIFI.”

Once all Wits buildings are upgraded to the new network, there should be less connectivity problems according to Kotsiovos. “There will be less problems with the network, there may be minor incidents but not any big ones.”

The expected date of completion for Project Quantum is now July 2018.