The mining engineering student who passed away last week was remembered at a memorial service today.

A large lecture room on the Wits University campus was filled to its capacity on Wednesday, May 16, as students and staff attended a memorial service in honour of mining engineering student Sanele Dhlamini, who passed away last week in an apparent suicide.

Those who spoke about the 20-year-old student shared a simple message: Dhlamini was a vibrant young man who had made a deep impact on those around him and will be dearly missed. 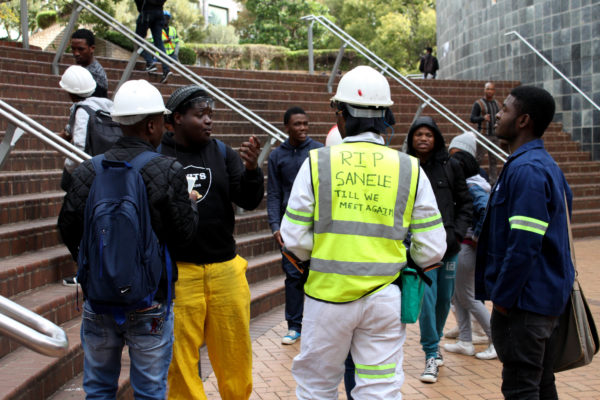 Dhlamini was a promising young student who had performed well in his studies. The head of the School of Mining Engineering, Professor Cuthbert Musingwini, emphasised that Dhlamini was well on his way to finishing his degree. “Sanele was a son of the school. The school has lost a very promising young man,” Musingwini said.

Dhlamini’s friends, who were emotional as they spoke of how they considered him not just a friend but a brother, each took a turn to say something about him.

Friend and fellow classmate, Ronewa Masuvhelele, said he learned a great deal from Dhlamini. “One thing I can recall about Sanele is that he used to talk his mind and never feared anyone. I choose to continue to tell the truth no matter how hard it is.”

Speaking on behalf of the School Council, Anelisa Ndongeni, said the School of Mining Engineering has decided to initiate a relationship with the CCDU in the hopes of assisting students in the future.

The dean of students, Jerome September, also addressed those gathered. “When I became dean of students just over a week ago I did not imagine that this will be the first public act that I would have to perform.”

Lecturer from the School of Mining and Engineering, Mothusi Mochubele, reminded the crowd to think fondly of Dhlamini. “Sanele leaves much unfinished, unfulfilled and unsaid.”

His advice to those gathered was to “focus on Sanele’s moments of joy.”