English graduate receives opportunity to continue studies in the UK

BA English Honours graduate, Thomas Hopkins, has been the fourth person from Wits to be awarded a scholarship from the Skye Foundation to further his studies at the University of Cambridge. 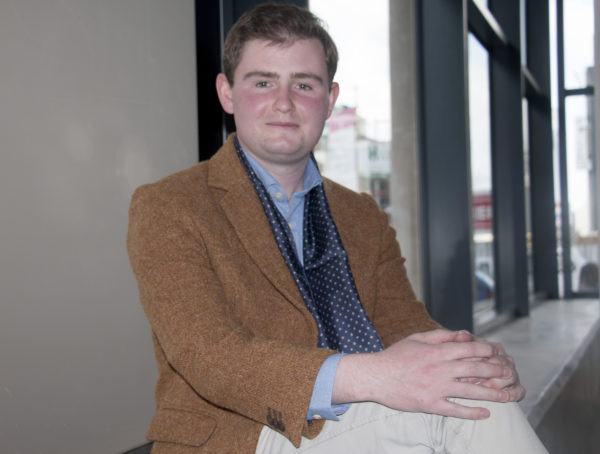 Thomas Hopkins (pictured) is a recipient of the 2018 Skye Foundation scholarship. Photo by: Sam Lee Hill

Hopkins told Wits Vuvuzela that he feels “honoured, privileged and grateful” to receive this accolade but it didn’t come without determination and hard work. “I wanted this from first year. I am as pleased as I can be.”

The Skye Foundation Scholarship is awarded to postgraduate students who have achieved academic excellence in their studies and intend to pursue a higher degree.

Students have to be strongly recommended for the scholarship by their head of school. Scholarships can be awarded to any discipline as long as the student is under 30 years of age and has met the criteria.

Hopkins, who describes himself as a “bizarre and antiquated fellow”, said that he is excited to continue his research on romantic poets at the same university where romantic poets such as William Wordsworth studied.

Head of English, Professor Christopher Thurman, was one of the two lecturers who recommended Hopkins for the scholarship. He said that he knew of Hopkins because of the continued excellence he achieved as an undergraduate student.

He told Wits Vuvuzela that even though this is “a nice feather in the cap”, his department gives Hopkins all the credit for their achievement following their recommendation for the scholarship. “It was a pleasure, not a duty,” he said.

Thurman said that no other English student has received this award during his time at Wits, “I hope this shows others students that they can have this opportunity if they have the conviction to pursue it.”

Hopkins will begin his Master of Philosophy at Cambridge University on October 1, 2018. He hopes to achieve his Masters within the academic year and continue to study towards a PhD.