The funny side of an American president 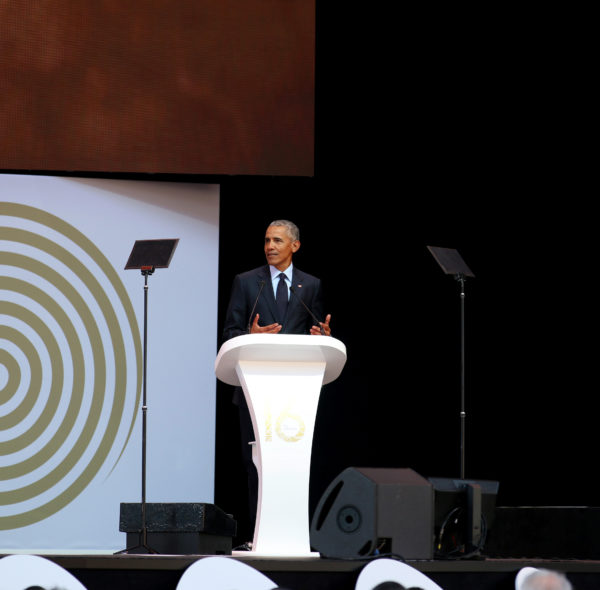 Barack Obama, former President of the United States of America, cut a tall figure on stage at Johannesburg’s iconic cricket pitch, Wanderers Stadium, slightly greying, but lean and fit. He was smartly dressed in a royal blue suit with a matching tie and a light blue collared shirt, standard attire for a man of his stature. Even from my seat some fifteen metres back, I could make out the tiny American flag pin on his lapel, a marker of national pride.

Obama casually began his lecture, by correcting the misperception that he is not the greatest of dancers. “I am a very good dancer,” he said. “I just want to be clear about that. Michelle is a little better.” And then he chuckled. A deep, spirited chuckle that I can only compare to Santa Clause. The chuckle caused Obama to break into a wide smile, displaying his natural and effortless demeanor, and a flawless set of pearly whites.

It was an intimate moment; chuckling softly to himself as if the thousands of adoring fans, many of whom had been waiting hours in the sun, were not hanging on his every word. I felt as if I had been transported to a room where he was speaking just to me. I was struck by the sincerity of his gestures, how genuine he became with a simple chuckle. I would imagine that this is Obama with his daughters, with his wife, with close friends, genuine and carefree. Regularly going off script, he would crack a joke, cock his head to one side and chuckles to himself.

That chuckle softened the rather austere annual lecture previously given by economists, activists, and writers.
Obama’s chuckle relaxed the expectations of a keynote speaker at such a prestigious event, even in front of the country’s highest dignitaries. This simple yet genuine gesture captivated me.

This man of such great importance, who has sat in the Oval Office, coordinated wartime engagements, met with heads of State and led the American people for eight years. Yet there he was, in front of thousands, chuckling as if the enormity of the event was lost on him. I looked around and saw a captivated audience, one that hung onto his every word, eased by the chuckles, encouraged by the sentiments.

The chuckles drew the audience in, and without them realising it, laughter tore through the crowd like a contagion of optimism. Obama was not short on jokes, commenting on the weather and the definition of ‘lecture’ even. “I forgot my geography and the fact that right now it’s winter in South Africa. I didn’t bring a coat, and this morning I had to send somebody out to the mall because I am wearing long johns.” And again he chuckled, allowing the audience to be entertained by his misfortunes.

Obama will go down in history for many things. It may be small and insignificant in the face of everything else he has accomplished, but I will remember that Barack Obama, former President of the USA, chuckles at his own jokes.