A group of Black women academics are pooling their efforts to help a new generation of academics find their place at Wits University.

The FAB Academic Research Club, set to be formally launched in September 2018, is the brainchild of Dr Busi Mkwananzi, a lecturer in the Wits School of Social Sciences. She says the programme aims to familiarize undergraduate students with the different aspects of research by giving them articles to read and critically discuss.

“It’s bringing research back to the Black child by showing them they can disagree. I want to develop people’s voices, undo the idea that you can’t disagree with experts, and teach students to disagree in a way that is constructive,” she says. Mkwananzi, a former dentist who now holds a PhD in Demography and Population Studies, says the articles given to the students will predominantly be her own. She calls this a decolonized approach because it will encourage students to debate her ideas with her directly and contest the idea that research is produced by “old white people”.

Mkwananzi runs her research club along with fellow Wits academics Dr Peace Kiguwa, Dr Poppy Masinga, and Prof Mzikazi Nduna. The four academics have engaged in various initiatives since 2010 including Fatherhood Connections (FACTS), Witsie, and Sexual Orientation and Gender Identities. The initiatives all share a common purpose: to introduce students to the expectations of research and academic work from an undergraduate level, and fully equip them to deal with the demands of a career in academia.

The initiative shines a light on the serious underrepresentation of Black women in academia.

Lindiwe Manyika, Director of the Wits Transformation and Employment Equity Office, says that Wits has set targets to address the professoriate gap and is actively identifying talented and qualified people, particularly Black women, from the corporate sector to encourage them to join the university’s academic staff. The university is also encouraging people to nominate candidates.

However, recruiting candidates has been challenging.

“The academic space is inherently different from the corporate space. We need to make sure the candidates we have recruited are properly supported so we are able to retain them, especially when they are coming from different backgrounds,” she said. 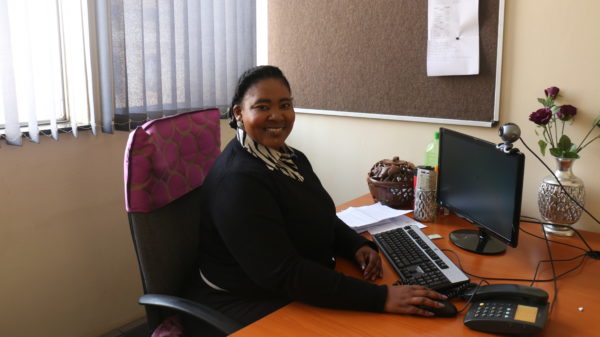 Mkwananzi, on the other hand, argues that recruiting at a postgraduate level is not enough to address the racial disparities. She says that Black women are underrepresented because of structural issues which begin at an undergraduate level.

“The problems we have as a Black child is like an onion, it’s a layered problem. The outer layer is fees and access but once you strip that away the inner layer is the institutional culture and opportunities,” she added.

She argues that when she was a student, the lack of Black academics in the Wits Health Sciences department translated into a lack of opportunities for black students which left them feeling alienated from the academic space. When lecturers approached undergraduate students to help with research-related work, Mkwananzi and other Black students were not approached, despite the fact that she was a top achiever.

Prof Mzikazi Nduna, head of the School of Human and Community Development, agrees. “Women are less confident than men, have less access to resources, and may get pregnant.

“Higher education dissociates social issues from students. [Universities] think issues like rape and pregnancy happen outside in the townships and not on campus, so they don’t create policies that help students and academics who face those issues,” she says.

Nduna specifically pointed to the Wits pregnancy policy, which was only adopted by the university for the first time in 2018. The lack of such policies creates barriers for women who want to pursue a career in academia while also starting a family and find it difficult to meet the demands of research, which include travelling for research and conferences, while raising small children.

The mentorship initiatives has attempted to address these issues by providing support for pregnant students and securing bursaries to assist with the financial burden of studying. Students who have participated in the mentorship initiatives have gone on to publish research, present their work, contribute to books, and participated in panel discussions. A number of the students have also successful completed their postgraduate studies and secured positions at universities. Khanyisile Buyela, who participated in FACT, credits the initiative with equipping her with the skills to complete her masters in counselling. “I wouldn’t have finished without it,” she says.

“Research is very lonely. No one else understands what you’re doing, so [FACT] became like a family,” she says.

While recent appointments such as those of Prof Mamokgethi Phakeng as the vice-chancellor of the University of Cape Town and Dr Judy Dlamini as the chancellor of Wits are to be celebrated, the meaningful increase of Black female professors, in academia is unlikely to be shift dramatically without the same change in the institutional culture of universities.