Wits Football’s successful campaign in the Varsity Football season continued on Thursday, August 30, when they beat the University of Limpopo with a score of 2 – 0.

The result sees the team from Braamfontein remain in second place with a semi-final spot already secured while the University of Johannesburg remain at the top of the log.

The first half of the match was mostly played in the middle of the park with both teams well-organised. Wits created many opportunities but failed to convert in front of the goal for most of the half.

The Braamfontein boys finally found a hole in Limpopo’s defence and made it count when Mahle Mtabane scored from close-range for the first goal of the match.

Mtabane scored the winning goal of last week’s match against North West University and was awarded Man of the Match this week. He told Wits Vuvuzela that, “We started the game slowly but after that we brought the intensity up. We could’ve scored more goals but we’ll work on that next week against [Tshwane University of Technology]”

In the second half, Wits were awarded a penalty after a Limpopo player handled the ball. The kick was executed with expert precision as Wits increased their lead to two goals.

The boys from Braamfontein turned on the style later in the match as they tried to run down the clock and the Polokwane-based boys just weren’t up to the task. The result ended much the same way the match went with Wits holding a comfortable lead.

Former Wits student and team member, Bongumusa Masikane, came out to support the team at the Bidvest Stadium on the Wits East Campus. He told Wits Vuvuzela, “Wits came in knowing that it was going to be an easy game but they shouldn’t let their guard down just because they’re playing an easy team.”

Wits Football coach, Alzavian van Rheede, said it was not the team’s best performance but he was happy to have bagged the victory.

“We’ve been constant with our results; as coach I didn’t want to tamper with that. We want to play a specific brand of football.”

Mtabane told Wits Vuvuzela that although the team had secured a spot in the semi-finals it had not sunk in yet. “This is the first time Wits has been through to the semi-finals without having to win our last game.” 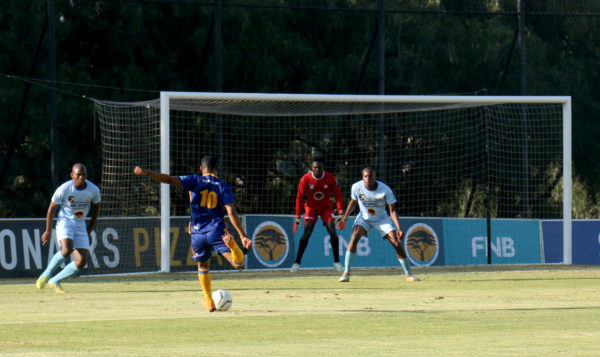