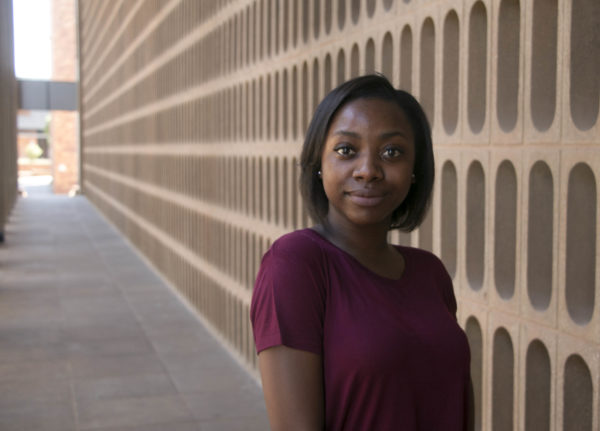 #SeeYouAtGraduation is a motivation campaign that I started for students where I literally just post words of encouragement on social media coming from a source that understands what it feels like to be a student, what the struggles are, what the challenges are, what the positive aspects are and to really just remind everybody why we come to university in the first place. We don’t come here for four, five, six, seven, eight years to do nothing. We come here to attend an education but essentially you’ll know that you have attended that education and you’ve gotten that qualification if you reach graduation and you get that 30 seconds to walk across that stage after they say your name.

Why did you start #SeeYouAtGraduation?

I started this campaign during my honours year. I had just graduated with a BEd and that transition going into the honours course was so difficult. There was just so much grey area, the content was different, the standard was different, the expectations were different and me and my friends just couldn’t cope. It was very hard for us to fully immerse ourselves in the course because we thought it was so different to the BEd and that adjustment in itself lent me to the phrase that I kept telling my friends, “Guys, we’re here for one thing and one thing alone. We’re here to graduate. We’ve done it before and we can do it again.” We knew what it felt like to walk across that stage, to dress up, take the pictures and feel the pride and the privilege of being able to graduate.

So that is how #SeeYouAtGraduation started. It started off as a WhatsApp group where we just used to encourage each other and ask each other what we were struggling with. From there it grew into what is now mugs that are branded #SeeYouAtGraduation that are usually sold as graduation memorabilia and motivation mugs for students of any age, any discipline, any department, any course, at any year.

What has been the biggest impact of your campaign?

The biggest impact of my campaign has been the privilege and the honour of being recognised by eNCA, Destiny magazine and SAfm. Being able to do something on a bigger platform and to share my story to just encourage other students and shine a light on some of the challenges that students face is really important. I was also featured in The Star newspaper. It was a very big deal that people who have influence recognise a small campaign like mine that seeks to be more than just a social media movement. I think that for me is the biggest impact – having other people understand and relate to something that I started from a WhatsApp group.

How have you experienced being the youngest in your department?

I have experienced it in a very positive manner. I came into the space as a former Witsie also having done the Wits education course here. My colleagues are my former lecturers so I was received with a lot of excitement and they gave me the freedom to be myself, to act my age but still in a very professional manner. They really let me come into my own in a space that I had already been a student in. It was really nice coming into the department as the youngest because I got to see it from two different perspectives: from the student perspective and now from a lecturer perspective. It’s been challenging in the sense that coming in and working alongside the veterans that have been teaching me and have been working here for a very long time – that transition in itself where at first I felt like I had to do a lot of catching up and I had to understand things on a different level as opposed to being a student – that kind of challenged me but with that challenge came a lot of growth and maturity.

Why made you enter the field of education?

Initially I did not want to study education, I wanted to study marketing, but I didn’t get into the BCom marketing course and my second option was education which I was accepted for. I told myself that I would do it for a year and then I would enrol for the course that I initially wanted to do from the get go, but that didn’t happen. I came to Education Campus and I really enjoyed education. I went on my first teaching experience and I really just had a knack for it; I was a natural teacher. I really enjoyed the content, I enjoyed the practicals, everything about it just spoke to me and I felt at home so I ended up finishing the degree and going on to do honours and masters and now my PhD in education as well.

What would you say is the biggest challenge facing education in South Africa?

The biggest challenge facing education at the moment for me would be the fact that learners in grade four do not know how to read for understanding, which is a big problem. This means that something in our system is ineffective – it’s either our teaching practices or our learners’ learning strategies or it could be both of those factors not being effective in connection to the curriculum also being ineffective. So, looking at these three factors, we need to think about how they work together in order for us to groom a 21st century child and to enhance 21st century education. You look at our education system and you just see that the biggest challenge is that learners in the foundation phase cannot read for understanding and reading is obviously the basis of everything that we do.

What are your future plans?

I see #SeeYouAtGraduation becoming a bigger campaign where it lends itself to becoming an educational trust. I really do pray that one day I will have the means and the opportunity and the resources to fund children’s studies in higher education and learning and also to be able to provide them with a platform to share their experiences as students and also to pay it forward, so some form of mentorship programme for students. Part of my future plan is also being part of a team that pioneers a new age of quality teachers from the Wits School of Education who will go on to be the leaders and the influencers of a great change in our education system at large, in our curriculum and in every classroom.