A quick Google search of the newly discovered dinosaur species, Ledumahadi Mafube, will generate results from National Geographic, CNN, and BBC – from the big names to the small, all using the same illustration of the giant creature as drawn by Wits MSc palaeontology student Viktor Radermacher.

Radermacher described the feeling as “surreal” after seeing his drawing of Ledumahadi Mafube on National Geographic’s website. He was commissioned to do the drawing of the dinosaur, which is currently the only depiction of what this Jurassic beast looked like. 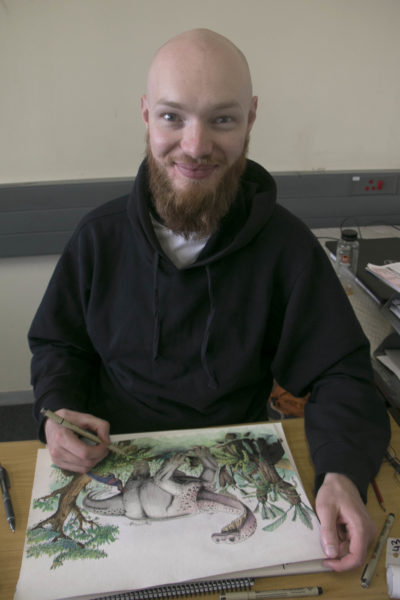 Translated from Sesotho as “a giant thunderclap at dawn”, Ledumahadi Mafube was described by a team of international scientists led by Wits University palaeontology professor Jonah Chioniere in the journal Current Biology last month.

Found near Clarens in the Free State, the dinosaur was the largest land animal alive nearly 200 million years ago. It weighed 12 tonnes and was double the size of an african elephant. It is not the biggest dinosaur ever found but it was the first true giant, Radermacher explains.

The work Radermacher did on this paper was the first commission he did this year and it was so good that he was commissioned to do two more drawings of the Shartegosuchus and the Chinese Alvarezsaurs which appeared in international publications. Radermacher describes this task as a responsibility, saying his rendition will characterise any subsequent mental image that people have of the dinosaurs he draws. “You want to make sure that your work [stands] out from the crowd.”

Radermacher has an animation and enthusiasm few people in life exhibit when it comes to their work. Palaeontology was always his first love and the marriage of science and art came naturally. “It was a very natural progression going from being in total awe and admiration of these things [dinosaurs] to just spending my time as a kid drawing them whenever I could.”

His younger sister, Astrid Radermacher, couldn’t be more proud of her brother but isn’t very surprised at the success of his art in the world of palaeontology. “Viktor has always created lush and anatomically correct drawings from a very early age. I have a distinct memory of him fussing over the pattering on the hide of a giraffe at five years of age. He has always had an attention to detail, a commitment to science, and a sparkly-eyed passion for sharing knowledge.”

Chioniere, who is also Radermacher’s supervisor, spotted the 27-year-old’s talent first. “I went into Viktor’s office one day and he’d drawn this really cool, comic-book style dinosaur. I was looking to get some artwork done for this big paper we had coming out, and my previous artist had fallen through. So I asked Viktor to give it a shot – his early sketches were brilliant and he never really looked back.”

Sitting around his desk, pens and colours strewn around, Radermacher describes his style as a hybrid between traditional scientific illustration and comic books. He prefers using traditional mediums such as ink and fine line pens which he will go over with fine washes of water colour. “Traditionally I like how tactile it is – I’m quite short tempered and I don’t work well with computers. I like feeling what I’m doing.”

The palaeontologist-turned-paleoartist says he likes to use his imagination within very strict parameters, a preference that lends itself well to scientific illustration based of fossils.

Chioniere said that it’s very rare to find someone with scientific training and sufficiently broad knowledge of animals who can also do illustrations such as the one Radermacher drew of Ledumahadi Mafube.

He explained, “All of the best palaeoartists have this knowledge. Sometimes, when you’re working with the best palaeoartists, they ask you questions about the animals that promote new research directions or they lead you to papers you might not have seen otherwise. I think Viktor will be that type of artist when he’s done with his PhD.”

For Radermacher, his first love will always be palaeontology. “I always treated it as a hobby and it’s now become a paying hobby. I think it will be another arrow in my quiver but my main desire is to do research.”

Following the reception of the team’s description of Ledumahadi Mafube, Radermacher’s drawing is also going to be used to describe this thunderclap in the board game DinoMight.