Food trucks on the rise in campus spaces 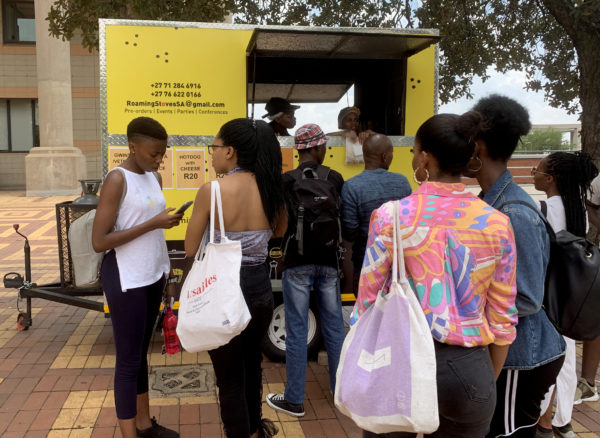 Khumalo told Wits Vuvuzela the business was developed as a way of eliminating high food expenses for the students.

“[We] saw a gap in the market in the sense that food on campus is pretty expensive, and as a point of entry we wanted to make sure that we provide something sustainable and affordable for students,” said Khumalo.

“At the beginning of the year there was a lot of protest about tuition, accommodation…and people do not realise that is coupled with food insecurity and that is a basic tenet of survival as a student… we spoke to Wits University and thought this is a problem we can solve,’ Khumalo added.

Deliteful Donuts is another food business on campus which sells mini donuts and has become popular to students. Their aim is to make accessible food that is usually expensive, for as little as R10 for four mini donuts and R20 for eight donuts.

“The sugar is crucial for energy and making the minds of students active in class while also filling them at the same time,” said Mavuso.

Panashe Sibanda, an economic science honours student, told Wits Vuvuzela that he appreciated the variety of food available on campus now from the emerging food trucks.

“It’s like I’m at a festival. The donuts are something different, something you can’t find on campus and they’re very cheap and the service is very speedy. That is why I come here every Wednesday and make my orders in the morning for lunch,” Sibanda said.

Gourmet Burgers, owned by Jabu Mothibe, is another food truck business on campus that sells township favourites such as kotas, chips, burgers and hot dogs. Mothibe believes that the low prices are what attract the customers.

“The response has been very good, since our price range is just below R30 per meal. Our kota menu starts at R12 to R25 and burgers start at R18 to just below R30 [including chips],” said Mothibe.

FEATURED IMAGE: Roaming Stoves food truck is one of three food trucks that have become a favourite on campus. Photo: Phumi Ramalepe