The South African president engaged with a local community ahead of the national elections in May. 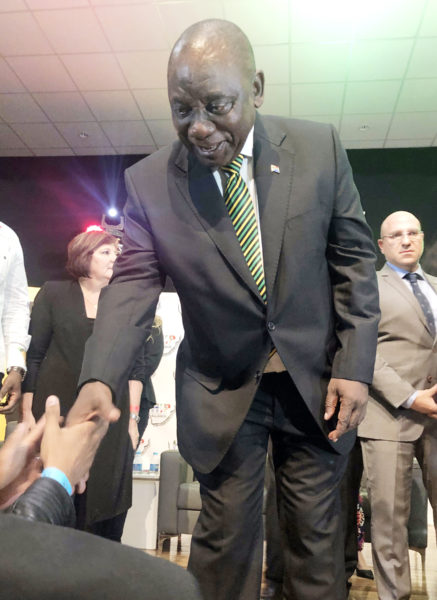 Strengthening social cohesion and race relations in South Africa were the key messages of President Cyril Ramaphosa’s engagement with members of the local community at the Germiston Hall on Tuesday, March 26.

Ramaphosa’s engagement took the format of a Q&A after an opening address by Gauteng premier David Makhura.

University of Pretoria graduate Costa Kyriacou raised the issue of a serious decline in employment opportunities and its impact on the youth. Kyriacou referred to the situation as a wasted investment in education.

Ramaphosa agreed with Kyriacou’s sentiments and responded by saying that there is a need to create awareness of the South African value system and to create a country where young entrepreneurs can start and run their own businesses with assistance.

Entrepreneur and environmentalist Catherine Constantinides raised the issues of gender-based violence saying that, “gender equality needs to be part of every conversation”. Ramaphosa said that the government is irrevocably committed to the empowerment of women and getting women into key positions. However, he stressed that this is a national task. Ramaphosa emphasised the need to support the ‘girl child’ in rural areas.

“In a few days we will be signing a declaration that specifically deals with gender-based violence … that deals with the economic empowerment of women … it will raise the level of consciousness amongst our people about specifically these issues,” said Ramaphosa.

Maurizio Mariano, a lawyer, questioned the president about the resurgence of racism, femicide and xenophobia.

In response Ramaphosa said that the government is putting together a plan to combat hate crimes which incorporates the hate speech bill.
“[The bill] is going to make a huge contribution to closing these fault lines and closing these cracks that keep opening up,” Ramaphosa said.

Final year Wits Industrial Engineering student Alessio Lencioni asked Ramaphosa how he plans to ensure the country does not neglect its manufacturing sector in an attempt to move towards automation and adoption of artificial intelligence.

“We have decided that we don’t want to be left behind [with the fourth industrial revolution] … this is the revolution that we are going to be proud of,” said Ramaphosa. He went on to explain that the government will be giving tablets to children in schools with the aim of raising technological knowledge at a young age.

“Innovation and creativity is the one thing that is going to open up avenues and opportunities for young people, for women in our countries,” Ramaphosa said.

Lencioni told Wits Vuvuzela, “I feel it is important to understand the stance that South Africa is taking on this matter, as the advancements of the fourth industrial revolution will undoubtedly change the very essence of employment.”

The president ended the engagement by saying that he is encouraged by South Africans who have embraced the idea behind the Thuma Mina campaign. “Mr President, send us. Let us go and do the work of building our African nation, of uniting this nation. My question to you all is whether you are those types of people?” Ramaphosa said.

The event was organised by the Hellenic Italian Portuguese Alliance which was established in 1994 to provide a platform of engagement between members of the community and the South African government.