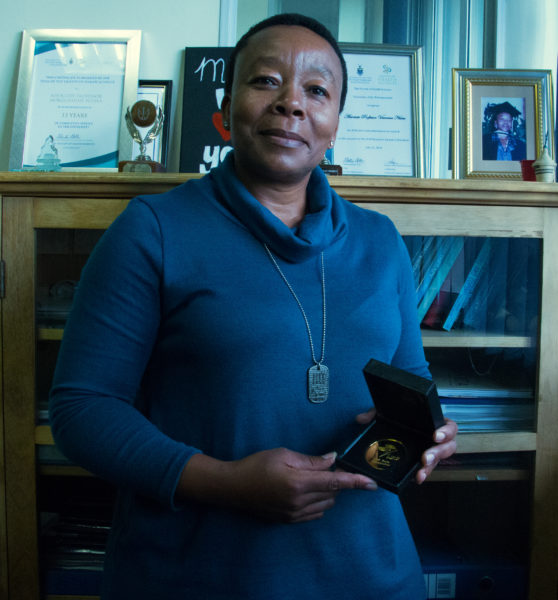 A Wits professor in the department of physiotherapy was awarded a medal by the National Research Foundation (NRF) on April 17 for becoming a rated researcher.

The NRF is an independent government agency whose mandate is to support and promote research.

Professor Veronica Ntsiea is an associate professor in adult neurological rehabilitation. Her research focused on the rehabilitation of patients with brain lesions mainly caused by stroke.

Ntsiea received a C2 NRF rating from 2019 until 2024 in which she will carry the recognition of being an “established researcher”.

She flourished under the leadership of Professor Hellen Myezwa, the head of School of Therapeutic Sciences.

“[Ntsiea’s NRF rating is] fantastic, I am very proud of her,” Myezwa told Wits Vuvuzela. “She received her rating in a short period of time. There are not many women who are rated as researchers.”

Ntsiea’s research will be reviewed by both national and international peers. “As a recognised researcher, one is likely to attract more postgraduate students as the rated researcher is perceived to be more research intensive,” she said.

“My confidence as a researcher is a notch higher because the rating is a recognition of the quality and impact of my research,” Ntsiea said.

She told Wits Vuvuzela that, “I also serve as a primary investigator on the Alexendra-Soweto stroke prevention project that I conduct in partnership with the Gauteng Stroke Working Group.”

Professor Judith Bruce, assistant dean of the health sciences teaching and learning office, also received recognition as a rated researcher by the NRF.

“Prof Bruce played a key role in my academic development from when my academic career began at Wits,” Ntsiea said.

“I am exceedingly proud of Professor Veronica Ntsiea,” Bruce said.