The three main political parties contesting the 2019 general elections were taken to task over their focus, or lack thereof, on climate change, industrialisation, and women empowerment at a panel discussion on Wednesday, 17 April at Wits University’s Great Hall.

Hosted by Wits student organisation, Rethinking Economics for Africa, the event brought together representatives of the African National Congress (ANC), Economic Freedom Fights (EFF) and the Democratic Alliance (DA), to discuss the economic focus of their party manifestos ahead of the national elections on May 8 this year.

The ANC representative, Phelisa Nkomo, said that her party’s development plan is to diversify the economy by growing the production sector through an increase in internships and removal of barriers to entry to the labour market. She also said that the ANC manifesto is “very clear” on climate change. “The first issue is that we recognise we need to develop a clear sustainable agricultural strategy to deal with climate change issues,” Nkomo said. 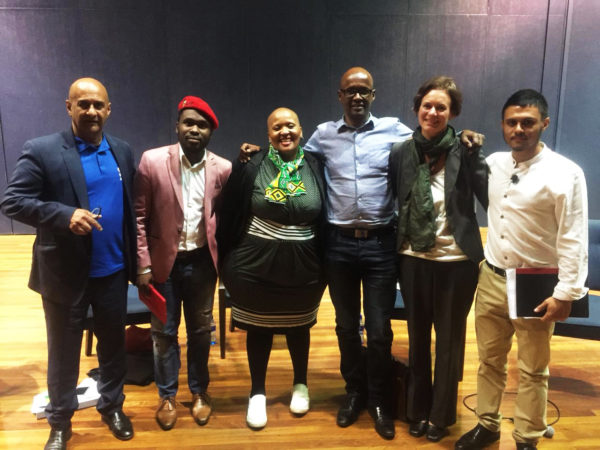 Raees Noorbhai, former chairperson of Amnesty International Wits, told Wits Vuvuzela, “The ANC manifesto makes no mention of the drought despite the fact that it was declared a national disaster at the beginning of last year.”

Noorbhai said the poor response to the drought was because of the looting of the water ministry by the ANC. “How do we as the voters trust the ANC to effectively address climate change?” he asked.

“None of the major political parties have a comprehensive policy on climate justice and none of them are cognisant of the urgency of the situation,” Noorbhai added.

Gumani Tshimomola, Economic Freedom Fighters’ representative, defended his party’s women empowerment stance, a focus of the discussion. “On the most important question of gender, women and non-conforming identities, we have 49 words [about women in our manifesto] because we are emphatic that in each instance where you will be buying 10 chairs, at least 5 of them must be bought from businesses owned by women.”

Tshimomola said that the EFF’s plan focuses on state-led investment by creating special economic zones where vast swathes of land will be made available to create jobs and make tax avoidance illegal.

Ghaleb Cachalia, the DA representative, said his part is committed to the privatisation of state-owned companies and the protection of private property.

“We will provide incentives to absorb businesses to create more jobs by lowering taxes for manufacturers and increase investments”, Cachalia said.

This is aimed at increasing economic growth through foreign investment and trade partnerships. They also want to make the minimum wage optional that will allow employees to opt-out should they wish to do so.

Manifestos speak to the economic challenges facing the country and are important as a “signal of what a party thinks, what it values, and what it emphasises,” said Professor Fiona Trenganna, economist and Professor in the Department of Economics and Econometrics at the University of Johannesburg.