A group of men managed to escape after allegedly stealing stock from the Braamfontein Centre’s G-10 Exclusive Wear clothing store around 06:00 on Tuesday, April 30.

Two security guards that were on duty at the time said two or three alleged robbers were waiting for the guards to open the centre’s security doors, and another was sitting in a car parked nearby.

“I greeted one of the guys standing by the garage doors when I arrived for my morning shift and everything was normal,” one of the guards, Joseph Mthembu, told Wits Vuvuzela.

He said he then went upstairs to relieve the night-shift guard, and the next thing they heard was the alarm going off. “I rushed downstairs with two of the other guards that were on duty when we heard the alarm go off and three guys ran out of the store through the glass door they had shattered with a large rock,” Mthembu said.

The night-shift security guard, Bongisipho Zondo, managed to pepper spray one of the suspects as they were running out.

“We kicked one of them and he fell near the door and he dropped some of the clothes they were trying to steal. One of them then came out from the car and pulled out a gun and threatened to shoot us so we ran away,” Zondo said.

“They went to a specific place in the store in the dark like they were familiar with it,” Mthembu added.

The owner of the store, who would only identify himself as ‘JT’, told Wits Vuvuzela, “They stole clothes worth between R80 000 and R100 000.” He said he was too shocked to discuss the robbery further.

The guards said they are only allowed to carry pepper spray and batons on them as Braamfontein Centre is a student centre and there is a college in the building. 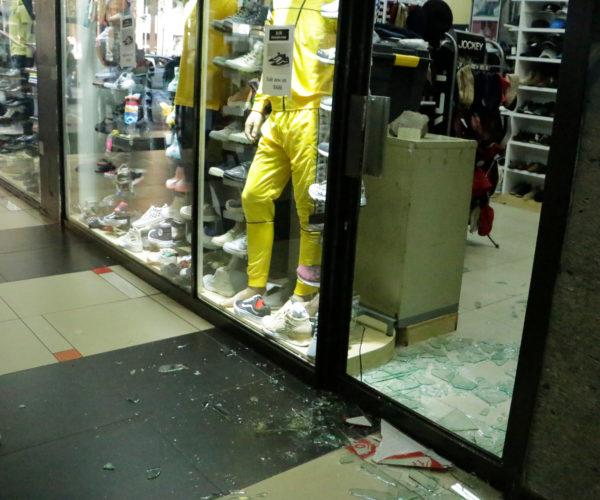 Shattered glass door where the robbers entered at a store in Braamfontein Centre. Photo: Lineo Leteba.

This follows a robbery at Wits Theatre that was reported on Monday, April 29, after one of the cleaners found the security door of the bar area open when she arrived for her shift at 07:00.

The manager of the bar, who chose to remain anonymous, said the robbers got away with confectionery and drinks “worth about R20 000”.

“They stole my speedpoint and they tried to break the till machine to take the cash but they left it there,” he said.

Head of Wits Campus Security Gary Kruser said he was waiting for the investigation to be completed to get the full report.

Commenting on both robberies, a policeman who was investigating the store robbery said: “How can people rob you when you say there is security here? What were [the security guards] doing? Wits University and the owner of Braamfontein Centre need to beef up their security.”