Music students set to receive guitars after they were stolen from their student lockers.

A Wits music student has raised R5 700 to replace three bass guitars which were stolen from the music department on the main campus in March this year.

Anwyll de Leeuw, a third year music student, started fundraising after he was approached by Thembi Maepe, one of the three students whose guitars were stolen.  Another two students, Nombambo Mgwagwa and Brownlee Dlulane also lost their guitars through theft.

“We raised more than our target and the money was used to buy two instruments and we have a surplus of money left to figure out what we are going to do with that money in the sense of finding another cause to sponsor,” he said. Only two guitars were bought after Maepe received one through a donation. 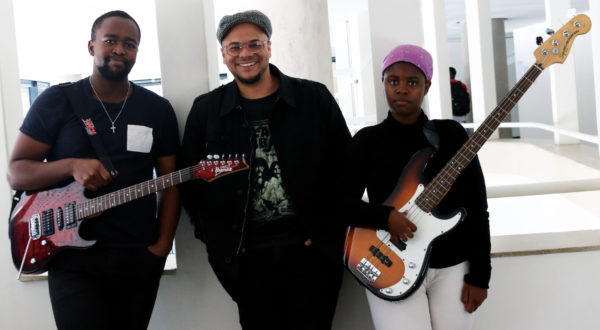 Music students were lucky to receive new guitars after a fellow student fundraised to replace their stolen instruments. From left to right, Brownlee Dlulane, Anywll de Leeuw, who did the fundraising, and Thembi Maepe. Photo: Lwazi Maseko.

De Leeuw raised the funds through donations from students and lecturers from the music department after he sent an email to all the lecturers and asked people on social media to donate to the cause.

The students opened a case of theft at the Hillbrow Police Station on Friday, March 15. They say they have communicated the matter and case number to Wits Campus Protection Services (CPS) but have not received any feedback.

Gary Kruser, director of CPS, said, “the majority of incidents reported to CPS are as a result of negligence of staff and students who sometimes forget to look after their belongings or to store them safely.” Kruser said, “The CPS wishes to remind students and staff that Wits is located in an urban setting and shares many of the crime and safety issues that exist in any city.”

“I am not happy that my personal belongings were stolen within the school premises where there’s 24-hour security,” said Magwagwa. Nonetheless, Mgwagwa said she was happy that de Leeuw  fundraised to replace the stolen guitars.

“We are approaching exams and we only had one bass guitar which Thembi and I were sharing,” Mgwagwa said.