Defending skills assist the Smiling Assassins in their 5th match of the Sasol Women’s League.

The Wits Ladies Football Club gained momentum after they defeated Nicko Taurus 2-1 on Wednesday, May 1, at Wits Sturrock Park.

Wits’ first goal came in the sixth minute of the game courtesy of Lesego Nkoane.  Lerato Magagula put the home side firmly in the lead with a second goal in the 18th minute. 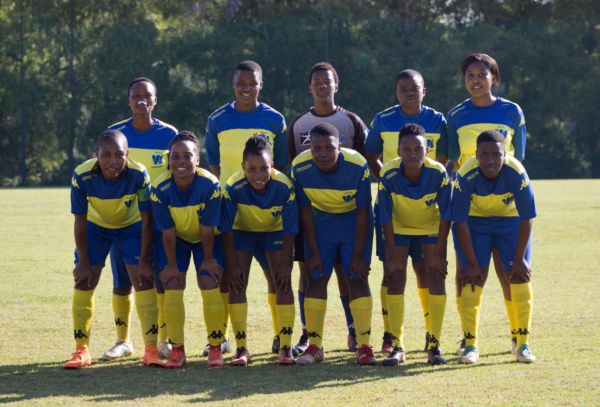 The Wits Ladies Football Club before their match against Nicko Taurus on May 1 at Wits University. Photo: Ortal Hadad.

Taurus, from Krugersdorp,made a comeback with a goal just before the end of the first quarter. Lizza Mokoena managed to get one past Wits keeper, Siphesihle Dlamini.

The game was a relatively clean one with only penalty awarded against Taurus for a foul on number 15, Molemo Mashigo while trying to score. Thelma Mahlangu took the penalty shortly before the end of the first half but failed to find the back of the net.

Wits played a defensive second half preventing an equaliser from the opposing side.

Nthabeleng Modiko, Wits coach, said she was particularly impressed with defender and team captain, Thabelo Mammburu’s performance in keeping the other team at bay. Coach Dunga, as Modiko is referred to by her players said she was generally satisfied with the team’s performance.

“We stuck solidly to the plan,” said Modika. “In some areas we didn’t fully get them, but this is something for us to work on for the next upcoming game.”

“They worked really hard and they wanted the win,” she added.

Modiko said she hopes this match will boost Wits’ chances in getting to the top 8 of the South African Football Association Sasol Women’s League. “It’s still early in the league but any movement is movement.”