Vegans cook up plan to save the planet 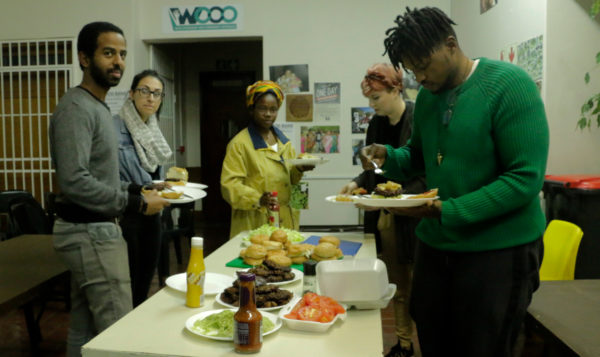 Take grated potatoes, soya mince, wheat flour, bananas, prego sauce, rosemary, salt, pepper and mix together, and what do you get? A very tasty vegan burger.

This was one of the recipes demonstrated at the cooking class hosted by the Wits Intersectional Vegan Project (IVP), on Friday, April 26, to advocate the importance of veganism. The audience included vegan students and those who wish to switch to veganism.

Portia Monaheng, who is studying towards a BSc honours in property studies, was in charge of mixing and frying the burger patties, and showed the audience how easy it is to make the juicy patty.

“If I were to change how my body is feeling, it was going to be through my mouth,” said Monaheng.

Twenty-one-year-old Tsholofelo Matlhola, a BA Law student, said that they decided to become vegan last January to save the lives of animals. “Animals can feel pain like we do.” This message was reiterated through the screening of a movie, Our Planet.

Thesan Chellakooty, who is part of a street activist organisation called Anonymous for the Voiceless, told Wits Vuvuzela that veganism is affordable.

“A cow needs to eat 18 kilograms of plants to give you 1kg of flesh. It is going to be very expensive to filter your nutrients through the dead body of an animal, so why not get 1kg of plant rather than giving 18 kg to a cow and then getting 1kg of animal flesh.

“This idea that your food is going to be bland and tasteless if you eat vegan food is wrong, because if you think about it, you have to spice your meat with plant-based food to make it taste nice,” Chellakooty said.

Chris Meletakos, who formed IVP with Matlhola, said that the cooking classes are held every quarter. “We usually try to cook together, or as a group of people, and we eat together.”

Veganism can be cheap or expensive depending on a person’s income and where they do their groceries, according to Meletakos. “If you go to Woolworths, a block of tofu is R70. If you go to China town it is R2.50.”

IVP’s goal is to provide complete plant-based options through working with Inala and the Wits Community Citizenship and Outreach programme, and for vegan meals to be available in the university’s dining halls.