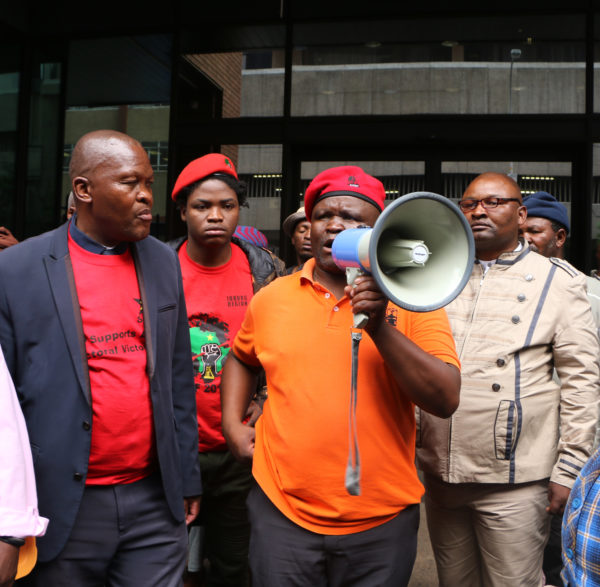 About 300 former mineworkers marched to the Mineworkers Provident Fund Headquarters in Braamfontein on Monday, April 29. The Ex-Miners Movement were accommpanied by their families and led by the student command of the Economic Freedom Fighters (EFFSC) as they made demands for compensation for outstanding pay, severance pay and death and disease caused by working conditions in mines.

“My husband was retrenched after they tested him [for silicosis] and shortly after seven days he passed,” Nomonde Mthunzane, told Wits Vuvuzela. Mthunzane, a 55-year-old widow of a mineworker, said that she joined the Ex-Mineworker’s Movement after her numerous claims for compensation for her husband’s death from silicosis were never processed.

Another widow, Paulina Mojakisane, told Wits Vuvuzela, “I didn’t get compensated for my husband’s long-service. My children can’t even work because I couldn’t take them to school when my husband died from tuberculosis after working at the mines.”

Former Wits University student Mangaliso Sambo who accommpanied the march as part of the EFFSC said the Ex-Mineworkers Movement was started in 2006 and is made up of over 250 000 ex-mineworkers requiring compensation from the Mineworkers Provident Fund for various grievances, including unfair dismissals as a result of illnesses incurred at the mines.

“It’s like a civil rights movement trying to make sure workers are assisted with any injustice that happened in the past,” Sambo said.

Steven Mbiza , the Ex-Mineworkers Movement coordinator from the Cape Town branch said some ex-miners had lodged claims since 2006.

“In 2016, after I claimed for my compensation for the third time, I was told I would receive a response within seven days and I am still waiting,” he said.

The Mineworkers Provident Fund told Wits Vuvuzela that the they were not aware about the march or its demands, dropping the phone before Wits Vuvuzela could ask any further questions.

The Ex-Miners Workers Movement is made up of mineworkers from various mines such as those in the Klerksdorp and Westdene regions, as well as Carltonville.