Close to 5000 voters cast their votes at Wits University.

The African National Congress (ANC) secured the bulk of the national votes at a voting station at Wits University Old Mutual Sports Hall (OMSH) while they were marginally beaten by the Economic Freedom Fighters (EFF) on the provincial ballot.

According to the Independent Electoral Commission, (IEC), 2 393 voters were registered to vote at OMSH, but over 2 846 eventually voted at the station.

The ANC received the most votes at 1,248, followed by the Economic Freedom Fighters (EFF) with 900 votes. The Democratic Alliance (DA) came third with 110 votes for the national ballot. 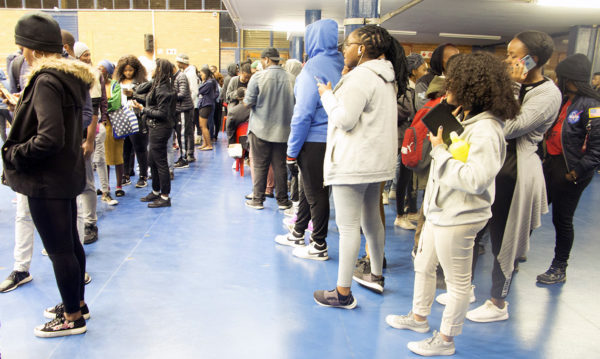 Voting at both stations proceeded smoothly with “only a few hiccups,” according to IEC party agent Buntu Makhedama. This was due to a few students arriving to vote only to find out that they were not on the system despite having registered to do so. “The issue is that there were a lot of irregularities during registration that are beyond our control now, so we have been gathering details of these students to find out what happened.”

Some voters felt that voting went smoothly at the voting stations at Wits campuses.

Second-year dentistry student Deniell van den Heever said that as a first-time voter she felt stressed because she did not know what to expect at the voting station, however, when she got there she had a pleasurable experience.

Van den Heever said there were three lines at the Education Campus  station, making it easier for voters. “I got there and did not know what to do but the [IEC officials] helped me, so it turned out positively,” she said.

Ricardo Marcus, a photographer who worked on the IEC’s Xsê campaign, said the IEC’s main aim was to get young people to vote. He added that the reason for this is because the youth is the one demographic that seemingly has no interest in voting because they feel their vote cannot effect change.

“A general consensus with the youth is that they feel their vote won’t do anything. We were trying to change that perspective,” Marcus said, adding that a part of him also felt that way.

“But for every one person who votes, it surely changes something,” he concluded.

The final election results are expected to be announced today, Saturday, May 11.

FEATURED IMAGE: Scores of students line up inside the Old Mutual Sports Hall to cast their vote. Picture: Anathi Madubela.