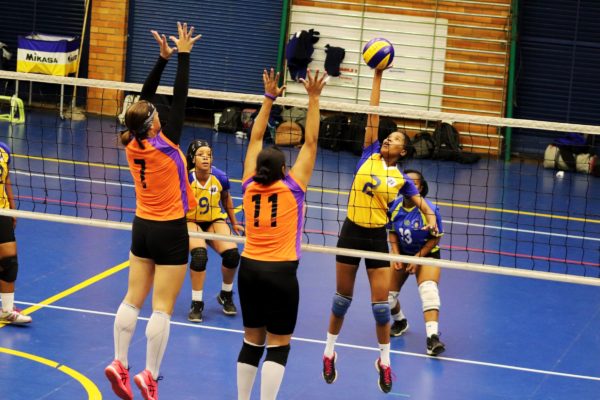 Wits’ passion shone through in their volleyball game against “the best team in the league”, UJ. Photo: Stephanie Schaffrath

The Wits ladies volleyball team kept University of Johannesburg (UJ) on their toes but failed to secure a win as the second round of the Johannesburg Volleyball League kicked off on Wednesday, July 24.

Wits managed to win only one of the four sets with a score of 25-18 in the second.

The Titans opened the scoreboard with four points in the first two minutes. The team lost momentum handing the first set to UJ with a score of 22-9.

Wits capitalised on UJ’s sluggishness to take the second set but UJ showed their experience by winning the third set 25-14.

The final  minutes of the last set were exciting for both teams as they each scored multiple times. The game ended with UJ winning the fourth set by six points.

“It’s been a good game,” said UJ supporter, Mandla Mdlalose, 54. “Wits started off well but they don’t seem to be able to maintain it. I think it is just a matter of experience,” he added.

Wits coach, Zweli Ngwenya, echoed these sentiments. “It’s more about the mental strength than the physical ability.” “We performed well, especially in the first two sets. The ladies even took a set away from UJ, which is the best team in the league,” added the coach.

UJ player, Rejoice Madikizela, told Wits Vuvuzela, “We like to keep up a winning spirit. We don’t like to lose.”