A Wits student is dragging his mother to the Johannesburg Family Court on August 29 in an ongoing maintenance dispute.

Thomas Klintworth (19), a first-year accounting student, is demanding over R7 000 a month from his mother to cover his food, water, housing, transport and university fees.

He told Wits Vuvuzela this amounted to 45% of his monthly expenses and was his mother’s portion of his maintenance fees, based on his parents’ divorce settlement from 2013.

According to Thomas, his mother, Louwna Klintworth (55), has contributed R10 000 a month towards the maintenance of her three sons including Robin (26), a PhD candidate at Wits, and a 17-year-old who is in Grade 11.

“I wanted some financial security, especially going to varsity,” said Thomas, who lives with his father. “I didn’t really feel like worrying about fees every night.”
According to Louwna, however, Thomas’s fears of academic security were far from reality.

The Johannesburg mother alleges that her son said he needed to maintain a social life and no less than R6 000 a month would do. This R6 000 then escalated to more than R14 000, which she says is the amount stated in legal documents Thomas has submitted to court.

Louwna said she could give her son only R3 000 a month, as she earns R27 000 a month after deductions from her salary as a personal assistant. According to Thomas, his mother refused to give this in writing.

“She said if we (Thomas and his younger brother) want maintenance from her, we will have to sue her,” Thomas told Wits Vuvuzela. Robin is self-sufficient as he has a bursary.

Louwna said she had always had a good relationship with Thomas, and speaks fondly of him, referring to him as “my darling son”.

Instead, her anger is directed at her former husband, whom she accuses of convincing their son to sue her.

“I live in a garden flat and I serviced my car for the first time in 10 years… and he (ex-husband Craig Klintworth) lives in a seven-bedroomed house.
“[Thomas’s] father wants a lifestyle for him that I cannot help him with,” Louwna said.

Thomas said, however, it was Craig (55), a custom gun-maker, who was paying his Wits fees and also paid his fees when he was at high school.

“I wanted Thomas to work hard and obtain A’s, which he was capable of in matric, and I urged him for the past three years to apply for bursaries,” Louwna said.

“I stuck my bank statements and debt on my fridge for him to see, but he refused to look at it.” 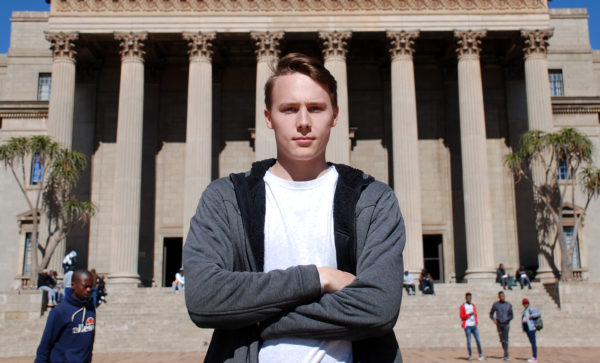 Adjunct professor at Wits Law School, Philippa Kruger, told Wits Vuvuzela, “Maintenance payments must be reasonable and affordable and are a preferent claim.

“In other words, they come before all luxury payments… Parents must pay what they can reasonably afford.”

Kruger’s colleague, Adjunct Professor Stephen Tuson, added that “There is a common misconception that parents only have to maintain children until they are [18 years old].”

He said children can actually be supported until they are independent or self-supporting, at whatever age that might be. Both parents, however, have an equal duty to maintain the child, “but equal duty does not mean equal maintenance”.