Stacey-Lee Bolon was elected unopposed as President of Convocation which represents graduates and academic staff in the affairs of the university. 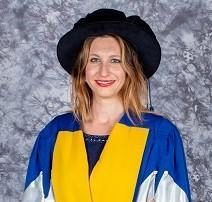 The Wits convocation elected its new president who will begin her tenure on August 1.

Stacey-Lee Bolon, who holds a master’s degree in industrial psychology, was elected unopposed as president of the body, which represents Wits graduates and academic staff in the affairs of the university.

Bolon will lead the executive team of the convocation and work alongside chancellor of the university Dr Judy Dlamini, Vice-Chancellor Professor Adam Habib, and the Alumni Relations office.

The new president told Wits Vuvuzela that she decided to run for president of the convocation because she has always had a keen interest in education and innovation.

“I believe that a solid education serves as a spring board for one’s career. Wits will continue to grow as a renowned university and I would like to contribute to this journey,” she said.

According to the Wits statute, the convocation enables alumni to have a say in university matters and it acts as an official channel allowing its members to convey their views to the university management.

Bolon was the only candidate from the Members of the Executive Committee of Convocation (Exco) who applied for the presidential position.

Michael Daramola, an associate professor in the school of chemical & metallurgical engineering who is also an Exco member said no else was willing to run for the position.

“People often want to shy away from responsibility, and this position was made open for anyone who qualifies,” Daramola said.

Bolon will take over from Dr Maurice Goodman, who was the acting president of convocation from 2016.

“I believe my predecessors have done exceptionally well in their positions as president, during a time where the university saw a combination of exceptional growth, alongside a fair amount of turbulence,” she said.

Bolon trusts that she will have the full support and backing of the Exco.

“I will continue to celebrate and embrace the diversity of views in our executive team,” she said.