Veganism is a lifestyle centered on the complete exclusion of animal products in a diet.  Given that a vegan diet excludes meat, dairy, eggs and sometimes even honey or refined sugar it is difficult for vegans to find a restaurant that comfortably caters for their needs.The new Lexi’s Healthy Eatery in in Rosebank, gives vegans a chance to eat out where they have more than one option on the menu.

Lexi’s though is not strictly vegan. The restaurant takes a plant-based approach to its menu which means that whilst the focus is on plant foods there is some flexibility in the use of animal meat. There are two sustainably-caught fish options as well as a free-range meat burger on the menu. 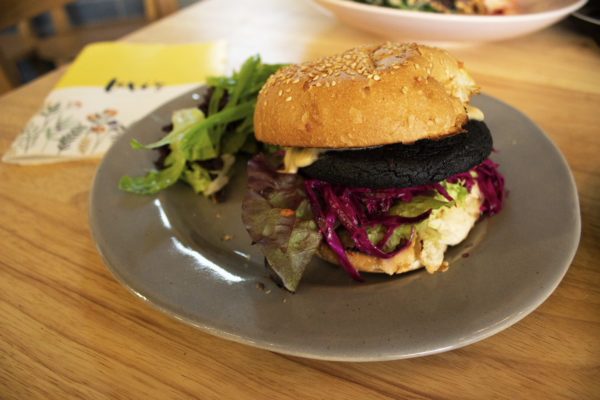 The popular activated charcoal burger is made up of a chickpea and sweet potato patty with carrot hummus, chipotle mayo and can be served with a side of greens, potato wedges or sweet potato wedges. Photo: Ortal Hadad

“It is generally difficult to go out with friends who want a meat option,” said Laura Schulte, a third-year, Wits biokinetics student who follows a plant-based diet.

Chef and founder of the restaurant, Lexi Monzeglio, told Wits Vuvuzela, “It was important to me to make sure there was no condemning attitude.

“If a family of four wanted to eat out and only one of them was vegan, they could still come here because all the non-vegans would be more comfortable knowing there was a meat option.”

Schulte, who had this meal at Rosebank last week, said it was particularly impressive as it was not dry or “boring” like many of the other vegan burgers she has tried.

Another specialty is the selection of the warm and cold bowls. Monzeglio says the Black Rice Bowl is her personal favourite.

The bowl compliments rice with mushrooms, broccoli, kale, pickled ginger, tamari cream and a nutty ensemble of walnuts and a peanut butter drizzle.

After trying both these meals during my visit to Lexi’s, I prefer the Black Rice Bowl because I really enjoyed the way in which the peanut butter was used in a savory dish. 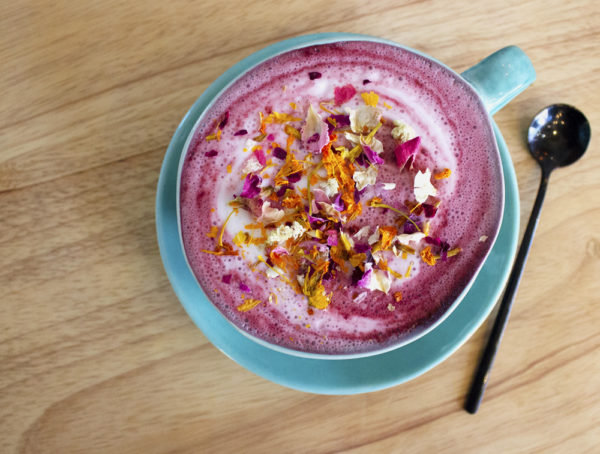 Although I enjoyed the drink, I would not recommend it for those who do not enjoy an earthy palate. The coconut sugar, blueberry, and spices cut through some of the bitterness of the ashwagandha but the woody taste dominates the mixture.

The greenhouse interior of the restaurant gives the feeling of being in nature without leaving the city. A lively atmosphere is created by the colorful cutlery along with the bright pops of yellow throughout the space which was particularly eye-catching.

The staff did well within the busy lunch hour and brought our food within 20 minutes.

Lexi’s stands out because, unlike most vegan-catering restaurants, this one is open for dinner. The kitchen is open until 21:30 during the week, until 21:00 on Fridays and Saturdays and 14:30 on Sundays.