The discussion was meant to focus on LGBTQIA+ issues but reflected more on African versus Western medicine.

“Sexuality has been used as a key to immoral issues for too long.” These were the words of Glenda Muzenda from the Centre for Research and Development of South Africa (CeredevSA) as she reflected on the impact of colonialism on African spiritual culture.

Muzenda was speaking at a panel discussion on African spirituality at the heart of the LGBTQIA+ community at Wits’ Solomon Mahlangu house on Saturday, August 3. She was joined by Dr Coenie Louw of the Gateway Health Institute, traditional healer Makhosi Sphamandla Gwala, and spiritual medium Ambuya Nyasha Kariza. The discussion was facilitated by Dialogues for Change’s Dumisani Mkhondwane-Dube.

Despite the stated intention of the discussion, there was little focus on the intersection between African spirituality and the LGBTQIA+ community and more on the relationship between African traditional medicine and western medicine.

“From the perspective of a traditional healer, diseases have natural and supernatural causes. We need to start integrating the two,” said Louw, who offered a medical perspective on the topic.

Muzenda argued that one of the reasons why Africans had not documented their practices in the colonial era was because of the fear that these might be stolen. “Currently, we need to have knowledge that is grounded in African understanding and not have people write for us. What we’re buying into is an understanding that is very flawed. As Africans we need to go back to the origins of information that talk to Africa and sexuality,” she said.

Kariza and Gwala tried to bring the topic back into focus by questioning religious and traditional approaches to sexuality.

“All the Bibles I’ve read have told me that God is love. If that’s the case, why would he hate the LGBTQIA+ community?” Kariza asked. 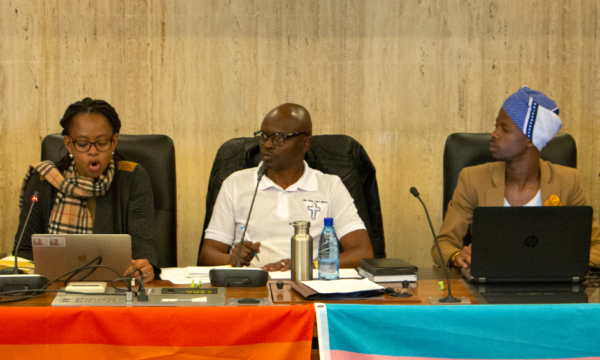 The discussion focused on the relationship between African and western medicine. Photo: Molobogeng Makoka.

“But I enjoyed the group conversations that followed after the discussion about how we should start integrating African spirituality in the mainstream and reclaiming our identities as Africans and removing the concept that whatever is from the West is universal and legitimate,” Matlhola told Wits Vuvuzela.

The discussion came two weeks ahead of traditional African medicine week, which will run from August 26 – 31, 2019.