Legal Aid SA employees have accused CEO Brian Nair of not caring about their plight.

A group of Legal Aid South Africa employees, supported by the newly established and registered South African Lawyers’ and Allied Workers’ Union (Salawu), marched on their employer’s national offices in Braamfontein on Monday, August 19, to hand over a memorandum. 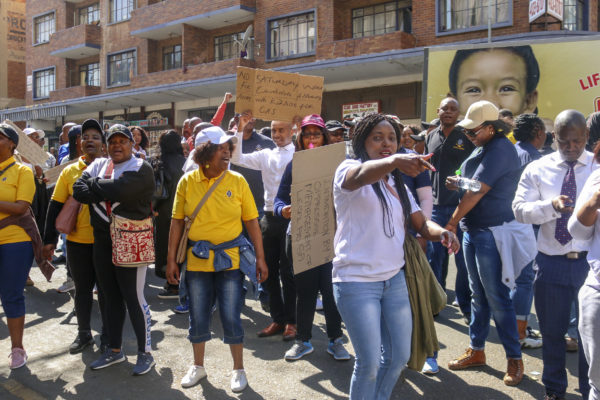 “The primary issues of dispute revolve around the reduction of limited employee benefits, a result of the severe budget shortfalls Legal Aid SA has experienced over the past few years,” Mfanafuthi Shabangu, national spokesperson for the employees, told the gathering of about 50 protesters.

They threatened to not report for work or attend bail hearings or any other matter, even though this would result in those relying on state lawyers to suffer in custody.

The Legal Aid employees said Monday’s march was the second this year because their grievances about working conditions, benefits and salaries in a May memorandum had not been addressed.

Attorney Michael Motaung, representing the workers, told Wits Vuvuzela that instead of giving employees proper feedback, “in fact [the employer] did not [address] even one of our grievances.
As a result, employees decided to embark on this protected strike and that is why we are here today.”

An employee of Legal Aid Advice Line, Sello Tladi, told Wits Vuvuzela they are hoping for better working conditions “and the review of our OSD (Occupational Specific Dispensation)”.
This means “revised salary structures that are unique to each identified occupation in the public service”, according to the Department of Public Service and Administration.

It is claimed it has not been reviewed since 2009.

Tladi said the Gauteng advice line had been the best performer for 10 consecutive years in giving legal advice services to the public, but its workers had not been acknowledged like their counterparts in other regions.

After a four-hour wait, the marchers’ memorandum was eventually accepted by chief operating officer Jerry Mokokoane, who was only able to acknowledge receiving it.

On Tuesday, August 20 the workers gathered at Church Square in Pretoria, from where they marched to the offices of the Department of Justice to hand over their memorandum.
It was accepted by the deputy director-general, Advocate Jacob Skhosana, on behalf of the Minister, who was not present.