The Smiling Assassins suffer a difficult loss in their 23rd week of the Sasol Women’s League.

The game started off relaxed, with little aggression from either side. Although Wits put up a strong defense, Croesus was able to push through and Zandile Mxasa scored Croesus their first goal 17 minutes into the match.

Shortly after, the tempo picked up and Wits tried to level the score with no luck. Croesus almost scored a second goal, but Wits goalie Robyn Coetzee was able to keep the ball out. As the first half progressed, the teams got more aggressive and going into the second half there were a number of unnecessary collisions between the players.

Three minutes into the second half Croesus captain Katrina Maguire scored her team another goal, putting them firmly in the lead. 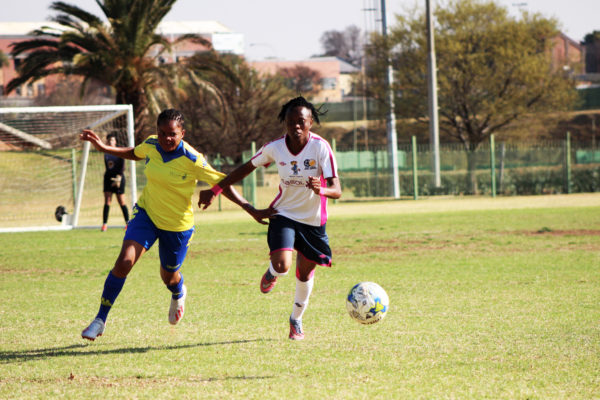 A Wits player, Kebogile Nteu, left, tries to regain control of the ball during a Sasol Women’s League match on August 24 against Croesus. Photo: Ortal Hadad

Wits’ first goal came from a free kick which was passed to Thabelo Mammburu who found the back of the net.

Although very close to scoring a second goal within the last 10 minutes, Wits was unable to tie with Croesus, leaving the final score at 2-1.

Despite not beating Croesus, Wits coach Nthabeleng Modiko, known as Dunga to her players, said her team played with all their hearts.

“We were banking a lot on this win. We planned on a win, knowing that if we get that win we are looking nicely at position five [on the rankings],” Modiko said.

This year is the first time the Wits Smiling Assassins has played in the Sasol Women’s League Gauteng and Modiko said she hopes the team, currently in sixth position in the league, can end up in the top four.

Wits will next face Vaal University of Technology on August 31, at Sturrock Park.

FEATURED IMAGE: The Wits University Ladies Football Club pose for a team photograph before the start of their match against Croesus. Photo: Ortal Hadad