The Wits Students’ Physician Society handed over close to 250 care kits to an Alexandra NGO after receiving donations from the Wits community on Saturday, August 24.

The Lwazi Lefefe centre will distribute the kits to homeless people and drug addicted individuals living in and around Alexandra. Mandy Khiba, a 45-year-old nurse at the centre said, “Drug addicts are marginalised and rejected by their families and the community.”

“The donation is giving them hope. It really was a big deal to receive, since they are used to having to hustle for everything,” Khiba said.

Society member, Erin Crossman, said, “It was such a rewarding feeling to actually see the end result of the drive. The people we handed the kits out to were so grateful.”

The 19-year-old medical student added, “It really felt like we made a small contribution to improving, (even) just a small aspect of their lives.” 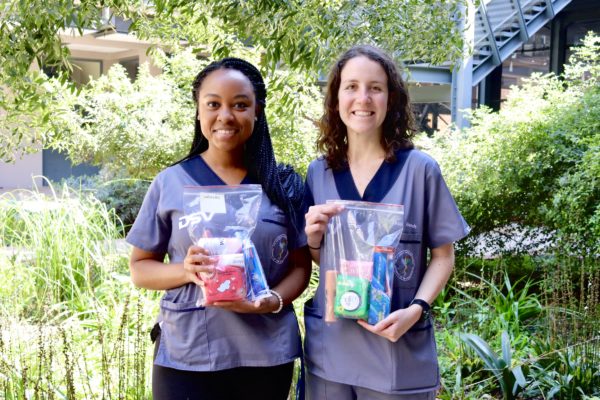 Vontner Ayaya (left) and Alexandra Bench (right) with the care kits that were handed to the Lwazi Lefefe centre in Alexandra. Photo: Stephanie Schaffrath

The students started their drive to collect the toiletries in March this year when donation boxes were placed at various lecture halls on Wits campuses.

Donations of various toiletries together with around R4500 which was raised through events and raffle tickets, went towards the compilation of the care kits.

Each kit contained a can of deodorant, a bar of soap, a toothbrush and a tube of toothpaste. Women recipients were also given a pack of sanitary pads while men received a face cloth.

Alexander Prins, Wits alumnus and former head of outreach for the Society, said, “I work at a free clinic called Trinity Clinic, which is for homeless people in the inner city of Johannesburg. The idea for what to include in the care kit was based on what we were constantly being asked for (at the clinic).”

Head of outreach at the Wits Students’ Physician Society, Alexandra Bench, told Wits Vuvuzela, “We will never say no to donations, but the formal dive will only continue again next year, with drop-offs at other NGOs like this one.”