Judy Seidman displays her work in public institutions to reach a wider audience.

The feminist slogan the ‘personal is political’  has shaped cultural worker Judy Ann Seidman’s approach to art and this is no different to the pieces in her current exhibition.

Drawn Lines, a retrospective of Seidman’s  work, opened on Saturday, August 24, at Museum Africa in Newtown.

“All my life I have focused on drawing people,” Seidman said. The works on show span three decades and are reflective of her experiences and perceptions of issues such as apartheid, feminism and HIV/Aids. The various mediums used to create the pieces on display include watercolour, oil, pastel and collage. 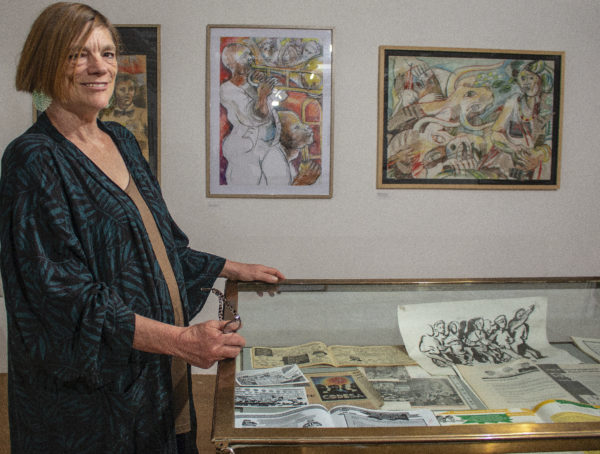 The Drawn Lines exhibition is a retrospection of a colourful art career. Photo: Ntombi Mkandhla.

“It is a reflection of her life story which is inseparable from the movements she has participated in,” said Dr Arianna Lissoni, a researcher at the Wits History Workshop. The workshop promotes community research and funded Seidman’s exhibition through the Everyday and Public History grant.

“Naming it Drawn Lines was a deliberate pun. You literally draw lines as an artist as well as draw lines doing what you believe in”, said Seidman, who uses art as social commentary.

“[The title] is symbolic of political and ideological fault lines which shape history and Judy has never been afraid to take the side of the oppressed and fight for injustice,” said Lissoni.

The American-born, Johannesburg-based artist experienced living in a newly independent Ghana in the sixties during her childhood. She also survived Apartheid’s onslaught on Botswana in a South African Defence Force (SANDF) raid on Gaborone. She was asked to leave by Botswana authorities in 1989. After a short period in Zimbabwe, she moved to Johannesburg in 1990 after negotiations between the ANC and South African governments unbanned liberation movements. Her art work aligned her to Cosatu, Codesa, the ANC and its armed wing, uMkhonto weSizwe.

Iconic pieces on display in the exhibition includes her 1976 political work called Soweto Uprising, a pastel drawing depicting the wailing screams of people in the aftermath of the unrest between black youth and Apartheid police. A collage of newspaper clippings of anti-apartheid newspapers such as the Daily Mail and The World  are pasted over the piece in the shapes of armed policemen.

“If you look closely, you can read that the clippings speak about people killed in the uprising,” said Seidman.

The feminist You Have Touched a Rock silkscreen poster, which Seidman produced in 1981 while she was with Medu, an arts collective of South African artists exiled in Botswana. The artwork commemorated the 1955 women’s march and was widely distributed in South Africa by the United Democratic Front in the eighties. 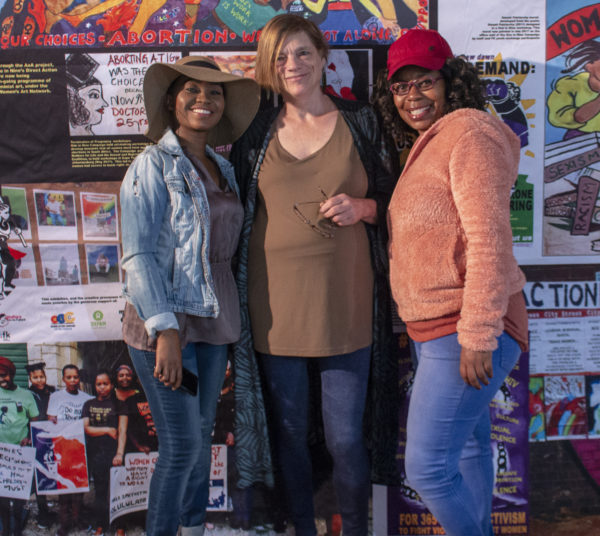 As a non-commercial artist, Seidman said she deliberately exhibited in Museum Africa, a public gallery, to share her work with a larger audience.

“Apartheid gallery art reinforced that only white culture was important,” Seidman said. She added that art should be moveable and go to where the people are for them to see reflections of their stories in the work.

“When you are doing art, you are putting new ideas out there,” Seidman said. She said that arts and culture are forms of communication and that people experience the images using their own perceptions and experiences.

Seidman said people can also use art to communicate among themselves and build a shared vision to ultimately transform the societies they live in.

School teacher Nonhlanhla Hlongwane visited the gallery on Wednesday, August 29 and described Seidman’s work as “inspirational”.  “History doesn’t die. The more you get conscientised on who you are, the more you find history even more relevant,” she said.

The Drawn Lines exhibition runs at Museum Africa until January 2020.